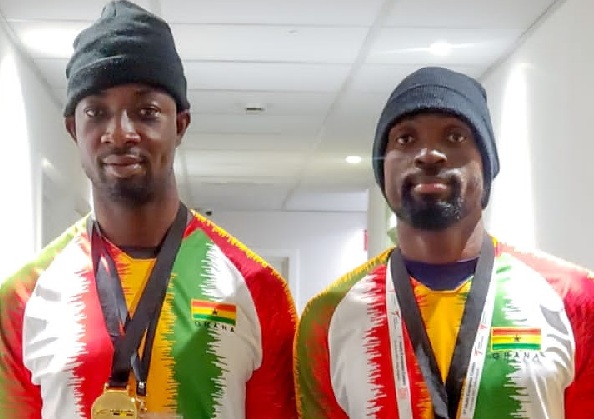 Joshua Nii Ayettey and Michael Davidson of the national taekwondo team returned home with two medals after participating in the Brussels International Tournament on December 4 in Belgium.

Nii Ayettey won gold and Davidson came home with silver despite an emergency registration for the competition.

The two had registered to participate in this year’s Austrian Open slated for November 28 but the championship was cancelled after their arrival in the country.

Disappointed but unrelenting, the two seized the opportunity to register for the Brussels International Tournament and moved to Italy for hosting and training under Master Charles Cromwell, an Italian-based Ghanaian coach.

Master Cromwell took Nii Ayettey and Davidson through tactical training and effective use of the digital scoring system in sparring which helped the duo finish the competition with gold and silver medals.

In an interview with the Graphic Sports Online, the two athletes expressed lots of gratitude to Master Cromwell for his assistance.

“It has been a good learning process for us and we can just be grateful for the support throughout our stay in Europe,” Nii Ayettey said.

The athletes noted that they were ready to take on any opponent on their journey to the 2023 African Games in Ghana and 2024 Olympic Games in Paris.

Master Adnan Lamptey, Secretary General of the Ghana Taekwondo Federation (GTF), vouched for the tenacity of the two athletes and called for sports authorities, organisations and individuals to sponsor them to attend more international tournaments.

“These are athletes that are ready to bring laurels to the country and I want to call on the authorities to come to their aid,” he noted.