Raphael Dwamena in stable condition after collapse in Austrian Cup 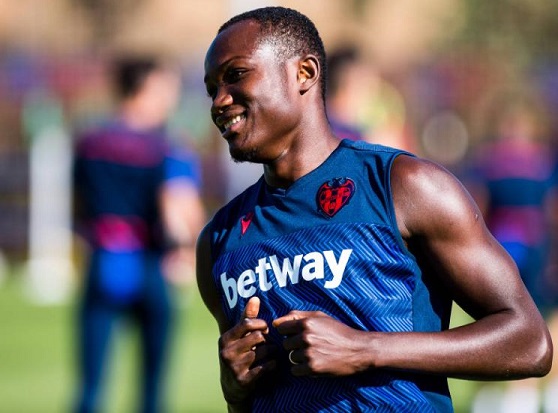 Ghanaian forward Raphael Dwamena is in a stable condition after collapsing during a football match on Wednesday evening.

Dwamena, 26, who was playing for Austrian club Blau-Weiß Linz collapsed during an Austrian Cup third-round tie against Hartberg.

Linz manager Stefan Reiter told the Austrian Press Association that: "His (Dwamena's) defibrillator hit and the doctors were able to stabilize him quickly."

Dwamena was conscious when she was transported to the hospital, and further tests are currently being carried out.

"Raphael's condition is stable," According to the manager's assessment and the rescue chain “worked extremely well”.

"It didn't take a second for the paramedics to be on their way to him."

Referee Andreas Heiss had interrupted the game for a short time when the score was 0-0 before the game was cancelled with the consent of both teams.

Reiter expressed gratitude and appreciation to the opponent. Hartberg's club spokesman said: "It was immediately clear to us that we would not continue playing today."

Dwamena's heart condition first popped up in 2017 when he failed a medical at then English Premier League new boys Brighton and Hove Albion and instead moved to FC Zurich.

It will be recalled that in October 2019, while playing for Spanish La Liga side Levante and on-loan at Real Zaragoza, doctors recommended his immediate withdrawal and retirement from football.

He, however, continued after having implemented an implantable cardioverter-defibrillator (ICD) in January 2020.

On 20 August 2020, Dwamena moved to Vejle Boldklub in the Danish Superliga.

He scored in his debut in the Superliga, as Vejle lost 4–2 to rivals AGF.

He was withdrawn from team activities after complications of his heart condition were detected before a Superliga match against AaB.

At that point, he had made five league appearances for the newly-promoted Superliga club and scored twice.

Due to his heart condition and some worrying measurements, Vejle confirmed on October 26, 2020, that Dwamena couldn't play for a period. Later in November 2020, the club sporting director stated, that Dwamena had played his last game for the club.[24]

On June 25, 2021, he returned to Austria and signed a two-year contract with Blau-Weiß Linz.