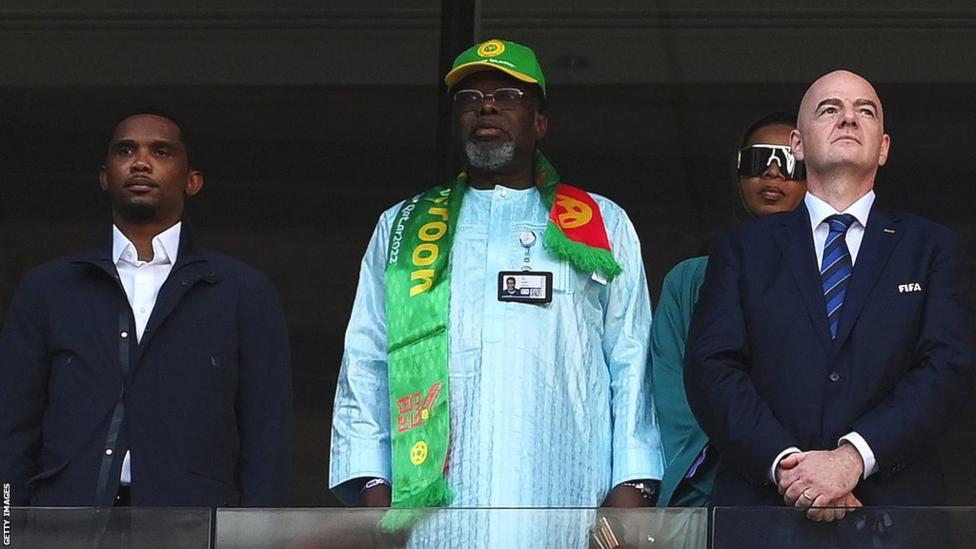 Former Barcelona and Cameroon striker Samuel Eto'o has apologised for his part in what he described as a "violent altercation" following a match at the World Cup in Qatar.

A video posted online appeared to show the 41-year-old, who is now president of his country's football federation (Fecafoot), lashing out at a man.

The incident occurred outside Stadium 974 in Doha after Monday's last-16 match between Brazil and South Korea, which the South Americans won 4-1.

Eto'o posed for several pictures with supporters before getting into an angry confrontation with another man with a video camera.

"I would like to apologise for losing my temper and reacting in a way that does not match my personality," Eto'o said in a statement posted on his Twitter account.

"I apologise to the public for this unfortunate incident."

🚨 Samuel Eto'o attacked a young man last night before the match between Brazil and South Korea. 😳

Eto'o, a four-time African Footballer of the Year, said he was provoked by a fan who was "probably" an Algeria supporter as part of an ongoing campaign of harassment following Cameroon's World Cup play-off win over Algeria in March.

The Indomitable Lions qualified for the finals in Qatar on away goals after scoring in the 124th minute of the second leg in Blida, and Algeria requested a replay after filing a complaint over the performance of the referee.

World governing body Fifa turned down the request and upheld the result.

"I pledge to continue to resist the relentless provocation and daily harassment of some Algerian supporters," Eto'o added in his statement.

"Indeed, since the Cameroon-Algeria match, I have been the target of insults and allegations of cheating without any evidence.

"During this World Cup, Cameroonian fans have been harassed and pestered by Algerians on the same subject."

Eto'o is also an ambassador for Qatar's Supreme Committee for Delivery & Legacy, which is overseeing the organisation of the World Cup alongside Fifa.

Fecafoot and the Supreme Committee have been contacted for comment.

Eto'o, who scored 56 goals in 118 games for Cameroon, was elected Fecafoot president in December last year.