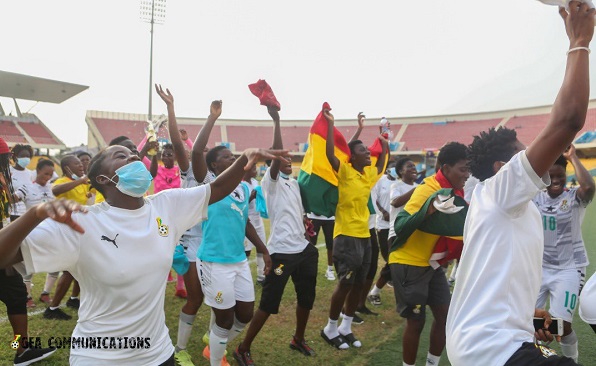 GHANA’s Under-20 female football team, the Black Princesses, have  picked a ticket  for one of Africa’s two  slots at the 16-nation Women’s World Cup scheduled for Costa Rica in August .

The Princesses qualified by spanking Ethiopia 5-1 on aggregate in their final round qualifying tie.

Yesterday at the Accra Stadium, the Princesses won 2-1 in the second leg of the tie  to record a double, having won the first leg 3-0 in Addis Ababa a fortnight ago.

A double strike from Salamatu Abdulai  early in the match and on the 24th minute consolidated the Princesses’ lead but they played through some scary moments as the Ethiopians  reduced the tally on the 29th minute through Amare Dagne Berka, and they could have taken the lead had two other goals scored not been ruled offside.

With a 3-0 lead from the first leg, Coach Ben Fokuo’s ladies thought the second leg was a done deal, and despite the promise that they would not be complacent, their performance was quite lacklustre. It was rather the Ethiopians who played with determination.

Indeed, it was not just a disappointing showing from the Ghanaians but it was almost an anti-climax for them as goalkeeper Cynthia Findib Konlan was shown the red card after she handled the ball outside her jurisdiction with only four minutes to end the game.

Abdulai’s second minute goal, going on a solo to brilliantly finish off, was a sign of hope for the Princesses as spectators took that as a sign of  completely running riot against the Ethiopians,.

However, they had to wait till the 24th minute before the second goal  was scored. A  move initiated by Doris Boduwaa in the middle  found Cecilia Nyaama who placed it  on the way of Abdulai in the box. Though marked by two  defenders,  she meandered her way through them and slotted the ball  past  goalkeeper Lorato Eyerusalem  to register  her second goal.

Undaunted,  the Ethiopians recovered and  came into the game strongly , equalising on the 29th minute from a free header after  an unmarked Berka soared to nod home from a freekick.

Between the 35th minute and 41st minutes, the Ethiopians hit the back of the net twice, but both were ruled offside and the Princesses held on to the lead to end the first half.

On resumption of the second half, the Ethiopians continued from where they left off, harassing the Ghanaian defence but the alertness of goalkeeper Konlan kept trouble at bay. The Princesses on the other hand also failed to convert the chances they created from the counter, giving the Ethiopians hope that if they pressedharder they could cause an upset.

That confidence paid off and on the 86th minute, they could have had the equaliser when sensing danger from a forward dashing Ethiopian attacker, the Princesses goalkeeper rushed out to intercept the ball in the arc. The referee ruled that as a professional foul and showed her the red card and awarded a direct freekick.
Substitute goalkeeper Grace Buoadi Banwaa who came on did well to coolly grab the effort from Ethiopia’s Hailu Haydebo Genet.

Banwaa saved a few more before the referee  blew her final whistle after four minutes of added time, signalling the end which ushered Ghana into their sixth U-20 WWC to be staged from August 10 to 28.

Nigeria’s Falconets picked the other ticket with an emphatic 7-2 aggregate against Senegal. The Nigerians won the second leg 4-1 in Lagos yesterday to complete a double too, having won the first leg 3-1 in Dakar two weeks ago.