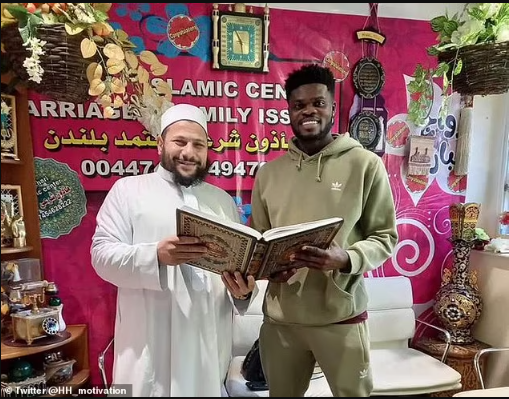 Arsenal midfielder Thomas Partey says he was only joking about changing his name to Yakubu in a widely circulated video on social media.

The midfielder in a post on social media said he was just joking and had reverted back to being called Thomas.

The Ghanaian international in the video said he changed his name to Yakubu following his recent marriage to Moroccan Sara Bella.

Eei chale I was enjoying it but now am back to Thomas again 🤣🤣 https://t.co/efNntBFNIF

"I have a girl I love, I know my side chicks will leave me but it's no problem," he joked in an Instagram video posted by Ghanaian journalist Nana Aba Anamoah.

"I grew up with Muslims so at the end of the day it's the same thing. I'm already married and my Muslim name is Yakubu.”

However, in a post reacting to the reports yesterday, Partey posted: "Eei chale I was enjoying it but now am back to Thomas again 🤣🤣".

The Ghana international reportedly converted to Islam in March prior to marrying Bella, who is a Muslim.

Partey was recently made a member of the traditional leaders of Odumase Krobo and given the name and title of Nene Sakite II and  ‘Mahefalor’ respectively.