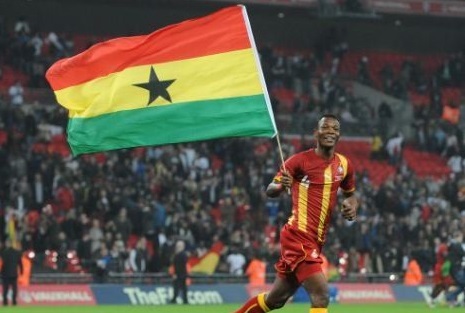 Former Ghana international, John Paintsil, has advised players of the national team not to make Cristiano Ronaldo and Luis Suarez their focus when they clash with Portugal and Uruguay at the 2022 FIFA World Cup.

He has also cautioned the team against approaching the competition with revenge on their minds as it could be distractive and prove costly.

The Black Stars were drawn against Portugal, Uruguay and South Korea in Group H and sets up two potentially explosive matches as Ghana seek to avenge losses suffered against Uruguay and Portugal at previous World Cup competitions. After last Friday's draw in Doha, Ghana Football Association President, Kurt Okraku, told BBC Sports that it will be "revenge time" to set the record straight.

The Black Stars Ghana open their campaign against Ronaldo-led Portugal on November 24 at the 40,000-seater Stadium 974 in Doha and take on Uruguay in the final group clash on December 2 at Al Janoub Stadium in Al-Wakrah.

Ghana lost 1-2 to Portugal at the 2014 FIFA World Cup in Brazil with Ronaldo scoring the winning goal for the Europeans and effectively ended Ghana's campaign.

For Paintsil, who represented Ghana at the 2006 and 2010 World Cup tournament, inasmuch as the Black Stars would want to  avenge that defeat, the Portugal captain should not be their focus because he no longer possesses the same energy he had eight years ago in Brazil.

“They don’t need to focus on Ronaldo; they need to focus on their game plan because as a player going into a game you don’t look at an individual. Ronaldo is still good but he can’t run but when he receives the ball before you get to him, he can use it so it’s only close marking," said Paintsil, who made 83 senior appearances for Ghana between 2001 and 2013.

Expectedly, the December 2 clash with the South Americans will be more explosive as the Black Stars face their 2010 World Cup nemesis Luis Suarez, who used his hands to clear a goal-bound shot, which denied Ghana a historic semi-final place at the 2010 World Cup in South Africa.

More than 12 years on, Suarez remains a key part of the Uruguay side, but for 40-year-old Paintsil who featured in that ill-fated match in Johannesburg, the Black Stars must avoid going into the game with revenge in mind but should rather approach it with a mentality of progressing to the next stage and make sure they achieved that.

“When you look at the current squad apart from Andre Ayew [current Ghana captain] who was part of the 2010 squad, most of them are new and they don’t really know the rivalry between us and Uruguay.

"So going forward, it will be advisable that they won’t feel that anger because if you approach a football game with anger it could go against you,” he advised.