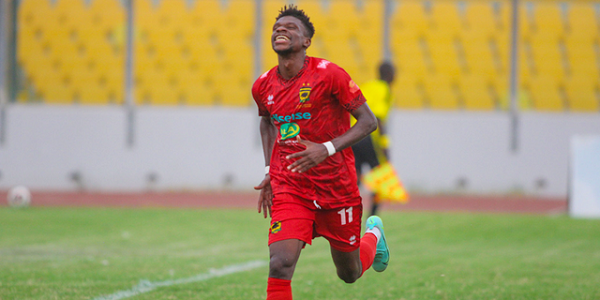 Asante Kotoko's Camerounian import, Etouga Mbella, took his personal goal tally to 13 in the ongoing Ghana Premier League as Kotoko kept a firm grip on the summit of the table with a 2-0 win against Dreams FC at the Baba Yara Stadium on Sunday.

Mbella struck twice, one from a spot kick in the 72nd minute and a personal effort eight minutes later to make him the leading goal scorer in the league despite joining the Porcupine Warriors at the latter stages of the first round.

First, he was brought down by goalkeeper Koomson while attempting to round him up, while in the second goal, he connected a rebound after his first left footer took a rebound off the upright.

But Dreams FC would have themselves to blame after missing glaring goal scoring opportunities with striker Huzuf Ali being the chief culprit.

Playing in their traditional all-red apparel as against an all-white by Dreams FC, the Porcupine Warriors pushed for an early goal but fumbled in the first nine minutes blowing away an early freekick, a corner kick and two successive attacks.

Dreams kept a calm composure while relying on Ibrahim Issah on the right side of attack and Huzaf Ali at the centre to harass the home team.


But in the 14th minute, Dreams' tall striker, Ali, lifted a me-and-you through ball over the cross bar after having raced with the ball and outpacing his markers.

Ironically, the wasted opportunity brought out the confidence level of Dreams players as they surged forward to break the tie.
Despite their surge for a goal, the Dawu-based Dreams FC were equally cautious not to drop their guard and be punished.
Indeed, in their meeting at the first round of the league at the Accra Sports Stadium, Kotoko took advantage of a similar overzealousness to beat them 3-1.

From then on, the game was punctuated with a number of injuries including a headbutt between Issah and Kotoko's defender, Charles Owusu.

The Kotoko defender could not make a return and his place was taken over by Richard Boadu in the 40th minute.
With barely three minutes to end the first half, Kotoko's Justice Blay disappointed his home fans with an uncharacteristic delivery, flying th ball from the box over the upright.

And on the stroke of the first half, Kotoko goalkeeper Danlad Ibrahim pulled off a dramatic save thwarting Dreams Issah’s point-blank shot.
A minute after the second half, Dreams FC's flopped another chance. After chancing on a long through pass, Ali lazily blew off the ball into the skies to the chagrin of the fans.

Blay brought the fans to their feet with a screaming header which was expertly parried off the cross bar by goalkeeper Augustine Koomson in the 65th minute.

Camerounian import, Etouga Mbella, scored from the spot kick after he was brought down by goalkeeper Koomson in the 72 minute. And eight minutes later he added another one from his personal effort.

Kotoko are now on 40 points as against Deams who have 23 points.