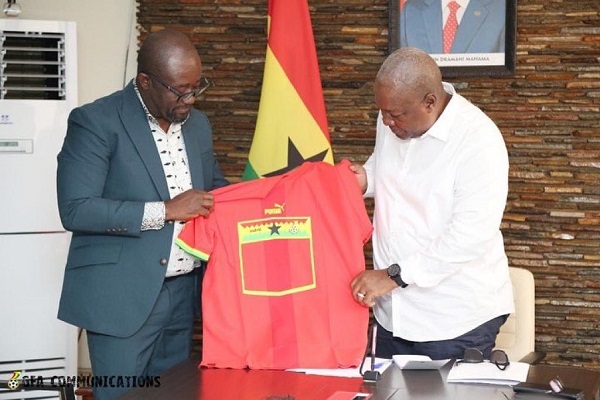 Ex-President, John Dramani Mahama has urged Ghanaians to throw their weight behind the Black Stars as they have been our source of unifier in country in the past.

He said during Black Stars matches, Ghanaians buried their political and ethnic orientation to support them in unison but the narrative has changed and challenged all to put their difference aside and support them.

“I urge that all Ghanaians should rally behind the Black Stars. The Black Stars in the past was what united us and any time the Stars were playing, there was no political affiliation or ethnic orientation as we all supported them.

“Recently, it doesn’t seem to be the same and I urge that we put all political considerations aside and know that, that is our best national team and for the boys to have the kind of encouragement to give their best on the stage”, Mahama said.

He said this when the Ghana Football Association president, Kurt Okraku presented a replica jersey of the Black Stars to him last Tuesday.

The former President said a victory for the national team would not be a credit to any political groupings but to the people of the country challenged all Ghanaians to support them.


“They need the support of the whole nation, simply put, we must depoliticise the Black Stars. If the Stars win, it’s not a credit to one political party or their other but to all Ghanaians”.

“It doesn’t matter under which administration it wins the cup or not, we must know that the boys are from all over the country who are not even political. Let’s support them because anytime they are going to play, I play my part by tweeting and sending them words of encouragement and I am their number one fan.

President Mahama admitted that he sometimes gets disappointed when the team doesn’t perform but added that the Black Stars play well in tournaments while it progressed.

“Sometimes I get heartache but now that I am a senior citizen I have to take it slow. Our team had a second half against Brazil and normally with our team, it with settling in and settling down. When we go to tournament it takes time for us to settle and play our real soccer.