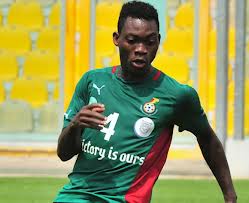 Liverpool have made a £5million bid for Porto forward Christian Atsu and hope to sign him plus Sevilla’s Luis Alberto.

Ghana’s Atsu, 21, plays on the left or behind the striker. Alberto, 20, is a similar player.

Atsu made 25 appearances for the Portuguese champions last season, as well as turning out for Ghana in the 2013 Africa Cup of Nations.

The rumours of  Atsu’s potential transfer to Liverpool have been growing stronger, especially after the player’s impressive campaign in the Africa Cup of Nations 2013.

He is yet another product of FC Porto’s comprehensive scouting network. Signed on at the tender age of 17, the Ghanaian winger was brought in under the radar with the goal of developing his full potential in the club’s youth ranks and ended up in winning the award for the club’s best young player in the 2010/11 season.


Even though he was called once by the then coach André Villas-Boas to a first-team match, he didn’t get to play until the 2011/12 season, when he was loaned out to Rio Ave. At Rio Ave, Atsu was given the time and space he needed to grow and leave his mark, without the added pressure of playing under the spotlight  had he remained at FC Porto.


During that season, the young Ghanaian amassed six goals and four assists in his 31 appearances (almost all of them in the starting line-up), playing enough not only to earn his spot on FC Porto’s definitive squad for the current season, but also to make a consistent impact on the team’s efforts, usually taking up Varela’s spot on the left wing, either starting or coming on as a substitute.

In fact, his importance has been growing to such an extent that he played in all of FC Porto’s Champions League matches, coming on halfway through the second half to punish his opponents for their weary legs.