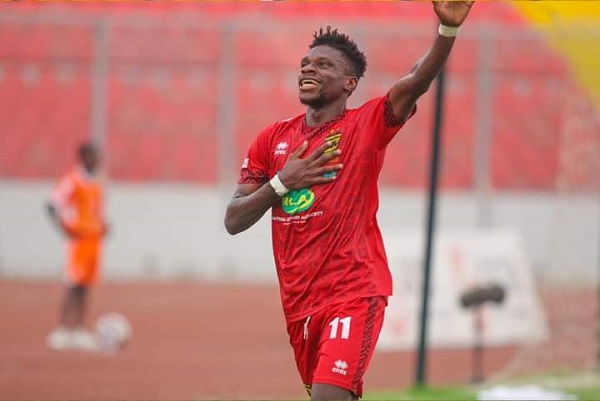 League leaders Kumasi Asante Kotoko descended on the Akoon Park and called the bluff of Medeama with a resounding 2-0 victory to brighten their chances of winning the 2021/ 22 Ghana Premier League trophy.

Two first half goals by Andrew Kwadwo Appau and their leading goal scorer, Franck Mbella Etouga, were all what Kotoko needed to silence Medeama at their own backyard and strengthen their position on top of the league table.

Kotoko made their intentions clear moments after kick off as they invaded the territory of their hosts with sustained attacks but found the defence of Medeama unyielding.

Kotoko, however, continued their forays and in the 23rd minute they earned a corner which was beautifully floated into the vital area of Medeama.

Appau, who was hovering around, soared above his markers to nod the ball home to the delight of the fans who had converged at the Akoon Park.

Medeama accepted the challenge and pushed more men upfront with the view of cancelling the lead but could not get past the defenders of Kotoko who built a strong wall to ward them off.

Just as the first half was heading to a close, Etouga set the stadium alight with a classic goal.

The attacker, who had been closely marked by his opponents managed, to free himself from his markers and finished off an attack initiated by Mudasiru Salifu to increase the tally for his side to 2-0.

It was the Camerounian forward's 19th goal of the season, one more than Ashantigold forward, Yaw Annor, who scored twice in his side's 2-2 draw with Accra Lions at Obuasi.
Red card

Kotoko, were, however, reduced to 10 men when Mudasiru received a second yellow card and had to play the entire second half without their key player. They, however, managed to defend their lead to snatch the maximum points from Medeama.

By the victory, Kotoko increased their points to 59, while Medeama slipped to third position on the log with 50 points. Bechem United who shared the points with West Africa Football Academy (WAFA) with a 1-1 draw at Sogakope jumped to the second position with 50 points.