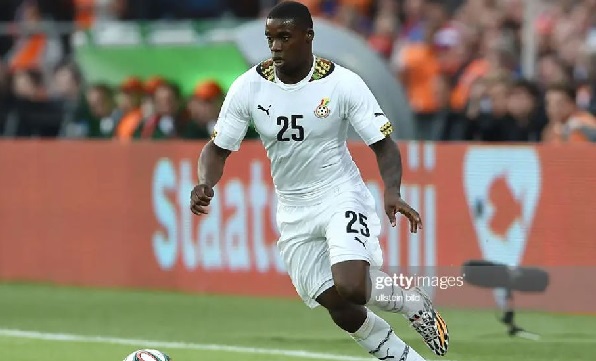 Crystal Palace winger, Jeffrey Schlupp, is set to make a return to the Black Stars after more than a year’s absence following his inclusion in Ghana’s provisional squad for the upcoming FIFA World Cup in Qatar.

The Crystal Palace player last played for Ghana in September 2021 but looks on course to join coach Otto Addo’s team for the tournament, Graphic Sports has learned.

According to sources close to the team, Coach Addo believes Schlupp’s versatility, strength and pace will offer the team a lot of options in defence, midfield, and attack.

The 29-year-old has been consistent for Palace in the English Premier League and has featured for his club in all matches this season.

Schlupp’s return will see him reunite with fellow English Premiership stars, Jordan Ayew, Mohammed Salisu, Daniel Amartey, and Tariq Lamptey, among others, who are all expected to make Coach Addo’s final 26-man team for the World Cup.

This could be Schlupp’s maiden World Cup appearance with the Black Stars after he failed to make the final team in 2014 tournament in Brazil despite being named in Coach Kwasi Appiah’s provisional squad.

Hudson-Odoi, who was born in England to Ghanaian players, is awaiting the completion of the process to switch his allegiance to Ghana having played for the Three Lions in UEFA Euro 2020 qualifiers against the Czech Republic and Montenegro in March 2019.

However, the 21-year-old is yet to feature for England since making his debut for the Three Lions in 2019 and turned down an opportunity to play for the country’s U-21 in August 2021.

His inclusion into the Stars team brings a lot of quality and competition upfront with Athletic Bilbao’s forward Inaki Williams having made his debut for Ghana early this month.

On the other hand, Samed could make his debut for the team at the World Cup after failing to make Coach Addo’s team for October’s friendly international games with Brazil and Nicaragua.

Samed was said to have denied an invitation to the team by Coach Addo in May but the Lens midfielder explained that his inability to play was a result of a knee injury.

In a recent interview with Sportsworld, Salis revealed that Coach Addo informed him about making the World Cup provisional squad.

“The coach sent me a message on Saturday morning that I am going to be on the provisional list. Everyone’s dream is to be at the World Cup and that is my dream too. I want to be in the final 26,” Samed said.

The majority of the players, who were used by Coach Addo in his competitive and international friendlies against Japan, Chile, Brazil, and Nicaragua, have been included in the provisional squad which will be further pruned to 26 just before the World Cup kicks off next month.

The squad includes players who recently made themselves available for selection such as defender, Mohammed Salisu, and others born overseas who switched allegiance after Ghana’s World Cup qualification.