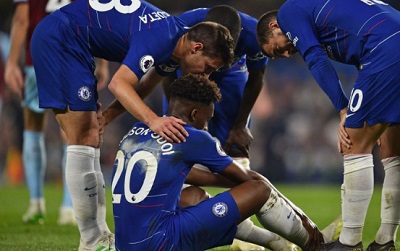 Callum Hudson-Odoi has confirmed that he has successfully undergone surgery after rupturing an Achilles tendon.

The 18-year-old sustained the injury in Monday’s 2-2 draw with Burnley and was placed under the knife on Tuesday afternoon after seeing a specialist.

In a short video released on Twitter, Hudson-Odoi said he was now on the “road to recovery”.

“Opperation [sic] was Successful, Thank God always and thank you all for your messages and support,the return begins now,” he added.

Hudson-Odoi will now miss Chelsea’s remaining fixtures as they bid to secure a top-four spot and also win the Europa League.

Opperation was Successful, Thank God always and thank you all for your messages and support,the return begins now!!!❤️❤️🙏🏾 pic.twitter.com/14qw4rgRK2

He will also miss England’s Nations League finals this summer after making his debut last month.

Hudson-Odoi, a product of Chelsea’s academy system, made 28 appearances and scored five goals in his breakthrough season.

He made his debut in the Community Shield against Manchester City in August and his emergence as a first-team player attracted the attention of England boss Gareth Southgate, who handed the forward his first senior cap against Czech Republic and followed it up with a start in the 5-0 win in Montenegro.

England’s manager was not the only one to be interested in Hudson-Odoi with Bayern Munich trying and failing to take him to the Bundesliga with a £35million bid in January.