Hearts of Oak to draw on Samuel Inkoom’s experience 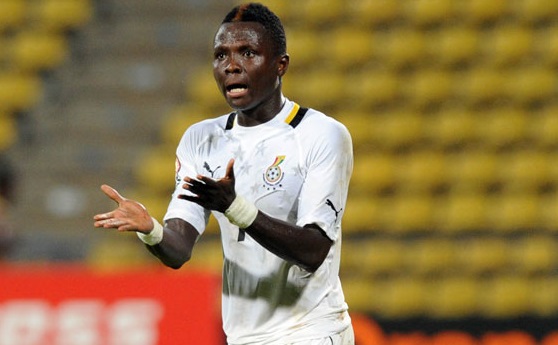 Accra Hearts of Oak officials are looking to new signing Samuel Inkoom to bring his wealth of experience to bear on the team's domestic campaign and also provide inspiration for his younger teammates.

Inkoom, 32, joined the Phobians last week on a year's contract and came on as a substitute against his former club Asante Kotoko in yesterday's Ghana Premier League clash at the Baba Yara Stadium in Kumasi.

He teams up with former Black Stars midfielders Sulley Muntari (37 years) and Gladson Awako (31) who were registered by the league champions this season, but a director of Hearts has rebuffed suggestions that the club is recruiting spent forces and insisted that the defender's recruitment is strategic.

According to Dr Nyaho Nyaho-Tamakloe, signing the well-travelled Inkoom 12 years after winning the Premier League with Kotoko before a professional career in Europe could not have been a mistake because he would have the similar impact on the team as Muntari had done since joining the Phobians two months ago.

“Hearts is not signing on old players. Hearts is signing players who have been outstanding internationally. These are players who have played for the nation before; they are not yet burnt out and they feel they have a lot to offer the nation," Dr Nyaho-Tamakloe told the Graphic Sports.

Inkoom left Kotoko in 2009 for Swiss side Basel and has since featured for 11 different clubs in nine countries in the last 12 years before returning to the Ghana Premier League.

For the Hearts director, while Inkoom may be at the twilight of his career, he has similar motive for joining Hearts as Muntari who is playing for free and helping the young players.

“I don’t know the financial details of Inkoom's contract. However, I don’t think he will demand something that will suggest he came in for money. His objective is also to come in to help the young ones to learn something," he said.

Dr Nyaho-Tamakloe maintained that any experienced player who had previously distinguished himself on the international level and still had something to offer would be given the chance to be part of the Hearts family.

Inkoom, who turns 33 on June 1, made 44 appearances for the Black Stars and represented Ghana at the 2010 FIFA World Cup in South Africa and was a finalist at the 2010 and 2015 Africa Cup of Nations.

The previous year he won the FIFA U-20 World Cup with the Back Satellites after which he was promoted to the senior national team.
His senior club career began with Sekondi Hasaacas and moved to Kotoko following which he had an unstable career in Europe and the USA playing for clubs like Basel, Dnipro, Bastia, Platania, DC United, Boavista, Antalyaspor, Vereya, Dunav Ruse Samtradia and Torpedo Kutaisi.