Hasaacas Ladies hopeful to advance against AS Mande 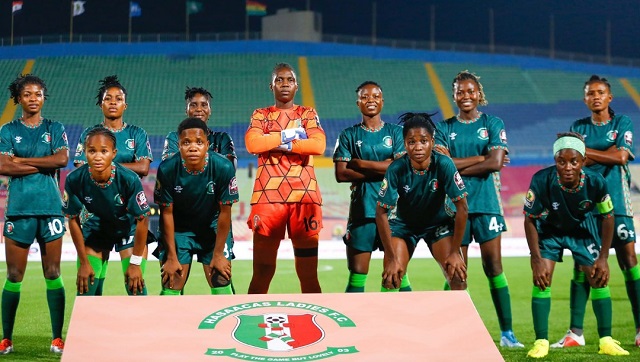 Hasaacas Ladies are eyeing another win when they play their second Group A game at the CAF Women's Champions League against Mali's AS Mande on Monday.

Having won their opening game 3-1 last Friday when the tournament kicked off, the Ghana doubles Champions and West Africa Football Union (WAFU) Zone B Champions hope to record a second victory and book their semi-final tickets ahead of the final group game.

Last Friday, they overcame their anxiety and put up a three-star performance to win 3-1 against Malabo Kings of Equatorial Guinea and Central Africa Champions to earn their three points.

A brace from Evelyn Badu who also won the Player of the match and a goal from Perpetual Agyekum gave the Ghana Champions an important winning start which they hope to build on to achieve their mission in Cairo - conquer Africa.

Monday's game is an all-West African affair comparable to any Ghana versus Mali clash.

Ghanaian sides have over the years dominated the Malians so far as women football is concerned and that is likely to be the case.

However, having also lost 1-3 to Egypt's Wadi Delga in the opening game, the Malians would want to recover from that and revive their hopes at the competition.

This will thus serve out an uncompromising encounter.

Coach Yusif Basigi is all too familiar with the Malian style of play - a robust defense, tight midfield often preferring to attack from the wings with their speedster.

If they deploy that tactics, Coach Basigi should find an antidote to nullify any threat they pose.

Coach Basigi though highly optimistic of their chances in this clash, is equally cautious and wary of the threat the Malians pose.

"Our game plan of getting an early goal worked in the opening game. It will be the same ploy as that will help ease any pressure from the Malians, but they will also come out playing it very tough with the hope to surprise us and we will be cautious on how we open up," he said of their game plan.

However, goalkeeper of Hasaacas, Grace Banwa will have to be extra cautious with her timing and poor judgement on kicks from set pieces as she is often too quick to go off her line and that poses a threat to her side as it happened against Malabo Kings who got their consolation from a similar attempt.

For quality and experience, Hasaacas Ladies are ahead and should they maintain their opening performance, they should be able to secure their second three points and advance to the semi-finals.

Coach Basigi is likely to stick to his winning starting line-up.

In the second Group A game, Wadi Delga will also be aiming for a second win after their 3-1 victory in their first game.

Malabo Kings on the other hand, will be hoping to recover from their stuttering start.

Group B takes a rest after the surprising results in the opening games last Saturday.