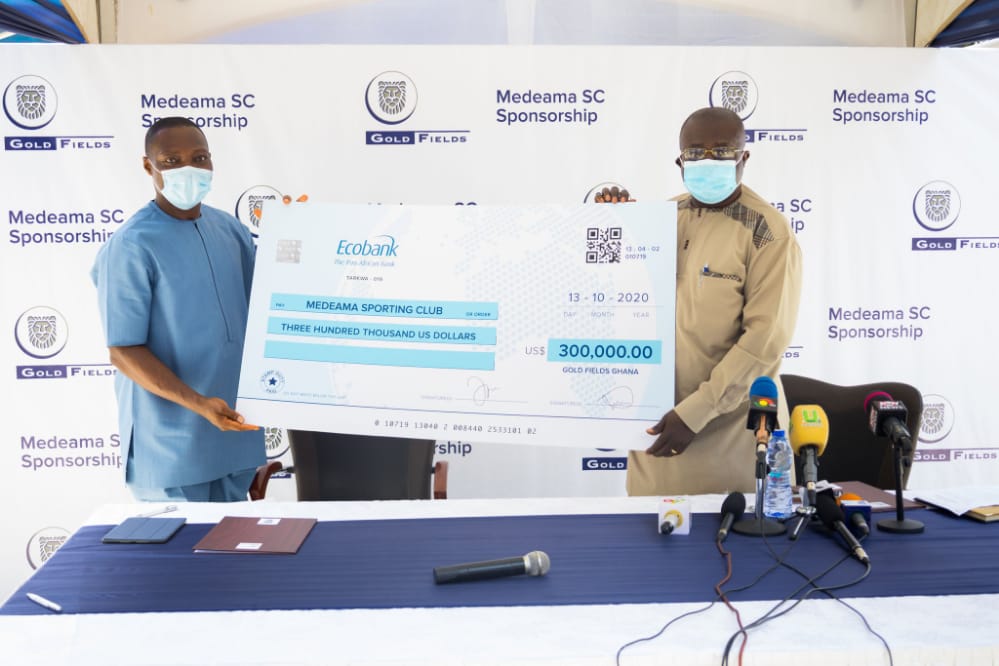 The season-long deal is the biggest sponsorship deal involving a Premiership club and is meant to support Medeama's participation in the 2020/2021 league and FA Cup competitions.

The deal covers salaries of players, managers, medicals, accommodation, feeding and logistics for the two-time FA Cup champions (2013 and 2015) over the next football season, which commences in the middle of November.

In an address before signing the deal in Accra yesterday, the Executive Vice President and Head of Gold Fields West Africa, Mr Alfred Baku, said the funds were expected to motivate Medeama to take their performance to the next level and cushion their finances, which have been affected by the Coronavirus (COVID-19) pandemic.

Mr Baku also pledged that the mining giants would announce another package for the Mauve and Yellow if they qualified for any of the African inter-club competitions.

"We expect the management of the club to use the funds solely for the purpose stipulated in the sponsorship agreement," Mr Baku said.

"In line with Gold Fields' sponsorship policy, we will monitor how the funds will be disbursed to ensure that they are used for the purpose for which they were approved. As a company that cares about members of our host communities, we will continue to support Medeama whenever there is an opportunity."

He also assured that Gold Fields remains committed to supporting Medeama as it had done over the years and would soon complete the reconstruction of its former home venue (T&A Park) into an international standard stadium.

"The modernisation of the Tarkwa Sports Stadium is currently ongoing and will receive a special media coverage when completed. When completed, the new stadium is also expected to boost Medeama's confidence and help unearth football talents in our host communities. We also believe that the new stadium would turn Tarkwa into a football hub in the Western Region," he stated.

For his part, the Board Chairman of Medeama, Dr Toni Aubynn, expressed gratitude to Gold Fields for consistently supporting the club for 10 out of its 12-year history.

He also assured that the club was primed to reprise its role as a giant-killer in the league and kick-on to achieve more success on and off the pitch.

"On behalf of the board, management and the playing body of Medeama, we can only be appreciative of this sponsorship and relationship between Gold Fields and its communities of which Medeama is a central part.

"We want to assure you that we will not disappoint Gold Fields and we will adhere strictly to the terms of the sponsorship and use the funds in a way that will enable us to ask for more," he stressed.

The captain of Medeama, Joseph Tetteh-Zuta, also pledged that the high-performance standards the club had exhibited over the past two seasons would be maintained.

"Without sponsorship, football organisations are not viable and the only way we can reciprocate the kindness of Gold Fields is by winning trophies. We are privileged to receive this sponsorship and we (the players) will conduct ourselves well, both on and off the pitch."