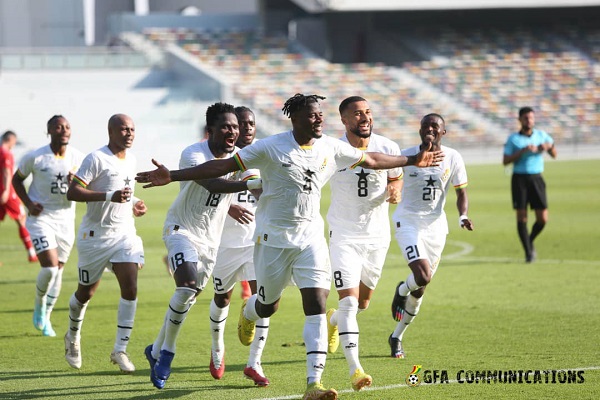 Two goals in the space of four second-half minutes saw the Black Stars upset Switzerland in their final friendly before the 2022 FIFA World Cup.

Mohammed Salisu and Antoine Semenyo got the goals for coach Otto Addo's Black Stars (ranked 61st on the FIFA ranking) against the Swiss (ranked 15th) in a game honoured in sweltering conditions at the Zayed Sports City Stadium in Abu Dhabi.

Salisu's goal came in the 70th minute after Switzerland failed to deal with a Daniel Kofi Kyereh corner. The Southhampton defender rose to convert a close-range header.

Antoine Semenyo doubled the lead after a mazy run on the left flank by Rennes winger Kamaldeen Sulemana saw the Stade Rennais attacker find Bristol City striker for his debut goal for the national team.

The goals were a reward for an improved performance from the Ghanaians after the break.

The Black Stars of Ghana will begin their World Cup campaign on November 24 against Portugal in Group H.


Swiss national team coach Murat Yakin said his team were affected by the heat and tiredness after 60 minutes.

"We played well for 60 minutes, after that the players felt a certain tiredness, and the heat also played a role. We took the risk that the result wouldn't live up to expectations. But the result doesn't upset us. Now we're fully focused on the first World Cup game," he said.

The Swiss will take on African giants Cameroon next Thursday, November 24, 2022, in their World Cup opener.