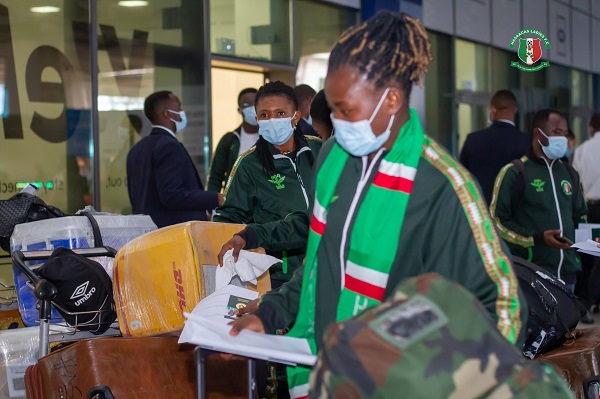 Sekondi Hasaacas Ladies have returned home after a successful campaign that saw them finish as silver medalists at the maiden CAF Women's Champions League staged in Cairo, Egypt.

Though they missed out on winning the ultimate as they lost 0-2 to South Africa's Mamelodi Sundowns in the final at the June 30 Stadium last Friday, Hasaacas Ladies nonetheless finished as the most decorated side, with Evelyn Badu winning the Best Player of the Tournament Award in addition to winning the Top Scorer Award with five goals.

Also, four players -- Janet Egyir, Perpetual Agyekum, Evelyn Badu and Doris Boaduwaa were named on the CAF Best Eleven team selected from the eight teams that participated in the two-week competition held from November 5 to November 19.

With their date and time of arrival not well communicated, the team arrived to a quiet reception with the Deputy General Secretary of the Ghana Football Association (GFA), Mr Alex Asante, the Chairperson of the Women's Premier League Committee, Mrs Hillary Boaten and some members of the Committee, at the airport to meet them.

Welcoming them back home, Mrs Boaten congratulated the West Africa Football Union (WAFU) and Ghana double champions for their impressive participation in the competition and their gallant fight in the final.

"You were great ambassadors to the women's game not just for Ghana and WAFU, but the whole of Africa and we share in your pride and glory.

"It is unfortunate that you missed out on bringing the trophy home, but you doubt earned the respect and admiration of all who love women's football on the continent," the WPLMC Chairperson said.

In an interview Head Coach, Yusif Basigi said though they were disappointed over not completing their 'Mission' in Cairo by winning the ultimate, they were still proud of their achievement.

"We went with the aim of winning the ultimate, but we could not achieve that. However, we are proud of what we achieved because we were able to claim the Best Player of the tournament, had the top scorer as well as four players named in the overall best XI players.

"That is an achievement we all can be proud of," Coach Basigi said.

" The tournament is not only an eye-opener for the participating teams but also a great platform for us to have showcased Africa women's football. This is a foundation on which the future of the game rest," he said.

Captain Janet Egyir also described the competition as a great experience as it provided clubs on the continent to compete against one another.

"Yes we were disappointed that we were not able to win the trophy as we had hoped to do, but we are proud of our second-place finish for the eight teams that participated. It was a great experience that we would like to go through again and we already looking forward to the next competition.

"Hopefully, we will qualify from WAFU to the main competition again next year," Egyir who was also named the Best Player in their semi-final match which Hasaacas Ladies won 2-1 against ASFA Rabat of Morocco said.