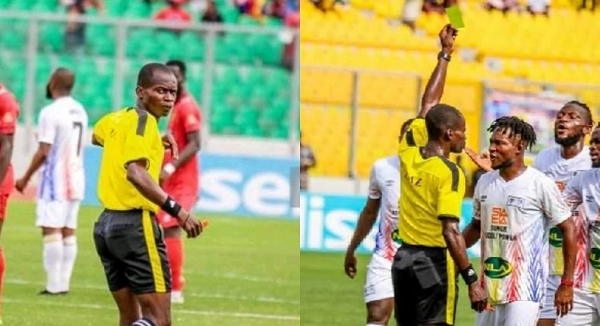 Referee Kenneth Padi has denied media reports that he lost his virility in the aftermath of awarding a penalty against Accra Hearts of Oak in a Ghana Premier League match against Asante Kotoko.

In an exclusive interview with Graphic Online, Referee Padi also denied media reports that he had quit as a Knight of the Whistle.

He added that the publications about his personal life had been traumatic, embarrassing and designed to tarnish his image as a strong man in bed.

“I am so very surprised about the falsehood being peddled about my erection," Referee Padi who has been banned for the remainder of the season by the Ghana Football Association's (GFA) Match Review Panel said.

"This is because I have never granted any interview to any radio station, so the rumour that I have not had any erection since the match or I have resigned as a professional referee is completely false” he explained.

“There is nothing wrong with my erection, so I have been enjoying my marriage so much. This is why I was surprised when I heard rumours about my erection.

He vowed to seek legal redress over the reports that he believes were published to ridicule him.

"I have already contacted my lawyer, and he has initiated a suit against all media houses who have been using their medium to embarrass me," he stated.

On his resignation, he said he had only been suspended by the FA and would continue to be at the centre stage of Ghana football after he had served his suspension.

The Match Review Panel concluded that Referee Padi erred in awarding the penalty which changed the outcome of the match and resulted in a 1-0 victory for Kotoko.

Padi has also been suspended from officiating all GFA organized matches.

At the hearing, referee Padi reportedly insisted that Abdul-Aziz stepped on the foot of Fabio Gama but later agreed that there was no stepping on the foot of the Brazilian after watching the video.

A GFA statement said the referee then, "defended that there was a push and pull at a point, which the video clearly showed that it was not the case".

The Panel after reviewing the video concluded that there was no foul committed which warranted any penalty.

"The hand on the back of the attacker had no impact on the attacker. More so the attacker should not have fallen backwards if the fall was because of the hand of the defender, obviously, it was not a push so falling backwards suggests a premeditated attempt to fake a foul," the Panel concluded.

The Panel said the video also showed quite a number of inconsistencies in Referee Padi's decisions during the match, especially after the penalty incident and attributed it to a loss of concentration.