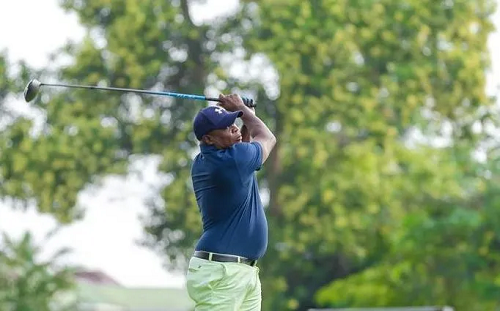 Emos Korblah won the 2021 Centre of the World Golf Open Tournament last Saturday at the World Golf Club, Tema (former Tema Country Club) after edging Vincent Torgah by one shot on the final day of competition.

The Achimota Golf Club star shot a one-under-par 71 to claim the tournament organised by the Ministry of Tourism, Arts and Culture and the Ghana Tourism Development Company to market Ghana as the centre of the world.

Three golfers, Korblah, Torgah and John Mawuli Nyarko were tied on overall scores of 141 after exchanging identical scores of 71 and 70 on the opening 54 holes over the first two days.

However, Korblah, held his nerve on an overcast third day to post a total points score of 212 (four-under-par), one-point less than Torgah and two less than third-placed Nyarko who recorded a score of 215.

He received a GHS5,000 cash prize as well as products and souvenirs from the sponsors for his effort.

In a telephone interview yesterday, Korblah credited his recovery after an unimpressive opening round which left him one-shot behind Torgah.

He also praised the organisers and sponsors for organising a "quality competition" which adhered to the COVID-19 protocols.

Korblah stated that although COVID-19 has disrupted his career as a professional golfer, he was looking forward to carrying his recent form into the Professional Golfers Association Championship in Darmang.

Some winners in the amateur categories included Tony Ani Boateng who shot a net 69 to claim the Men's Senior title, Florence Etwi Barimah recorded a net 83 to win the Ladies' Seniors.