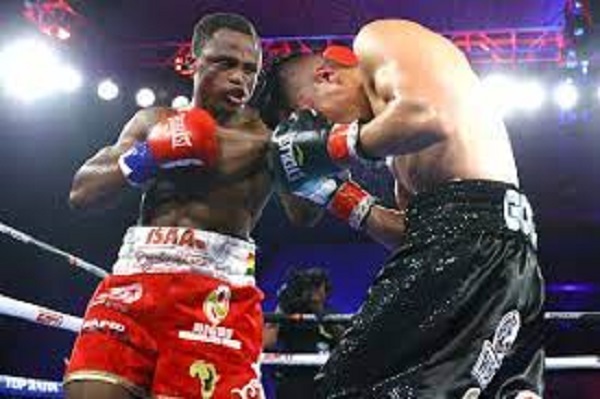 A WBC featherweight title eliminator, that also had a WBO International belt on the line, Dogboe is now well placed to challenge for a world title in his next fight as he pursues his dream of becoming a two-time world champion.

Dogboe started well in last Saturday's contest but as the bout developed, Gonzalez came back strongly. He threw combinations of punches, looking dangerous when Ghana's Dogboe retreated to the ropes.

Gonzalez kept up his workrate, but when Dogboe took shots, he came back with his own hits. He fired hard hooks into Gonazlez and slugged his right into the body.

The American began to line up clean right crosses, popping them through flush as he advanced in the eighth round.

Dogboe though was undeterred. He stood his ground in the ninth round, firing heavy punches in. A clubbing right hook stalled Gonzalez for a moment and Dogboe used those scything shots up close as he went to work.

Going into the 10th and last round, trainer Barry Hunter urged Dogboe on in the corner, knowing a close fight like this needed a determined final effort. Dogboe delivered it.

"Dogboe doubled his right hook and caught Gonzalez with the right again as he came in. The two went toe-to-toe with Dogboe digging his left to the body as Gonzalez poured on punches of his own.

The Ghanaian countered him where he could and they traded furious right hands as time ticked down in the fight. The Ghanaian unleashed a burst of hooks to finish confidently before waiting for the decision.

It was a close, exciting fight and hugely significant for Dogboe’s career. After a high level contest like this the next natural step will be a world title fight.

"I want to say thanks to Joet Gonzalez. He's a true warrior," he added.

"Whoever the champions are, they should watch out. The 'Royal Storm,' I am back, baby!"

Dogboe wants one of the featherweight champions. Emanuel Navarrete, the man who beat Dogboe twice to end his previous world championship reign, holds the WBO belt, though the Mexican could potentially move up in weight and leave that title vacant.

As well as being well positioned to challenge for the WBO belt, Dogboe said he would relish returning to the UK to take on Josh Warrington, the IBF title-holder.