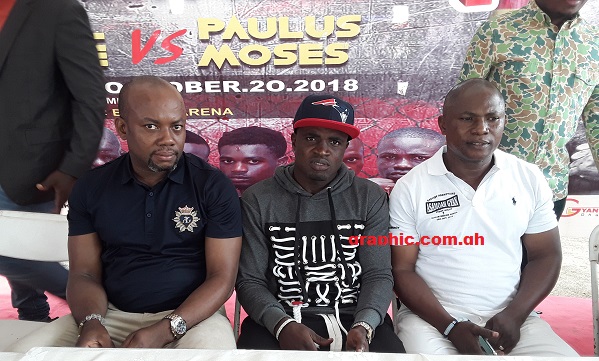 advertised as a press conference to announce Tagoe's (28-1, 14 KOs) bout with Namibian Paulus Moses (40-4, 24 KOs) for the WBO Africa lightweight title, the gathering on Tuesday was later overrun by fans who scrambled to catch a glimpse of their favourite fighters billed to tangle on the five-fight bill.

The conference started smoothly and with a lot of goodwill from the gathering especially after the new CEO of Baby Jet Promotions, Abraham Kotey Neequaye announced that former WBA lightweight world champion Tagoe had shelled out some of his personal resources to purchase some goodies for all fighters on the bill.

However, things went south when the Jamestown native Tagoe said his boxing skills were superior to that of Bukom favourites and fellow lightweights George Ashie and Richard Commey much to the displeasure of the partisan crowd. 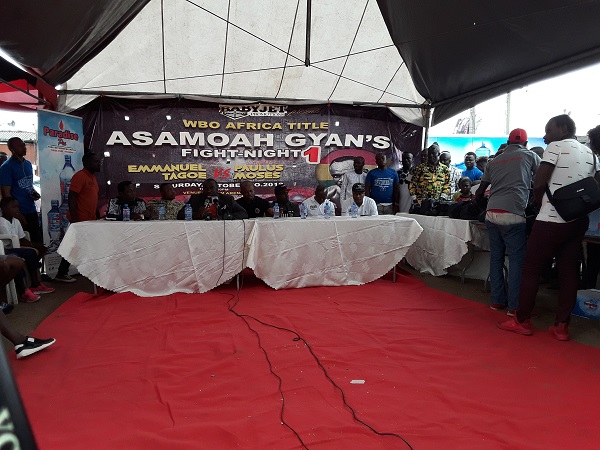 It will be recalled that interim World Boxing Organisation Africa Lightweight Title holder Ashie fought Tagoe in 2012 and lost out in what he and his fans have since maintained was a contentious majority decision.

He said he had defeated Ashie and battered Commey in a sparring session making him the King of that division in Ghana.

His comments triggered an outpouring of murmurs and jeers from the men, women and children gathered to witness the announcement but Gameboy and his team, would still not relent. Indeed, when things had quietened down, Tagoe reignited the debate when he stressed that he was a King that no one could unseat.

His manager and newly appointed CEO of Baby Jet Promotions, Abraham Kotey Neequaye (in his second stint with Team Tagoe) quizzed the fans if they were shouting because Ashie's name was mentioned.

He went on to claim that Ashie who became the interim WBO Africa lightweight champion after defeating Michael Mokoena in April ducked Tagoe in favour of an encounter with Stephen Ormond (on August 24 in Glasgow, Scotland) when he was approached by Team Tagoe for a rematch.

Nevertheless, the fans would still not buy into their explanations.

There were a few persons at the venue that sided with Tagoe though. Among them, Briamah 'Bukom Banku' Kamoko who urged the fans to recognise that bragging was an important part of selling fights.