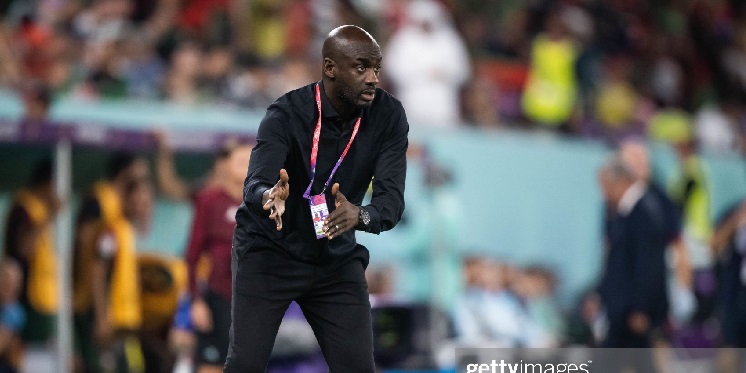 Ghana’s Black Stars went back to the drawing board yesterday as they tried to flush out the opening game loss to Portugal and refocus on their upcoming group encounters with South Korea and Uruguay in the coming week.

Coach Otto Addo and his captain Andre Ayew reckon that the team’s destiny lies in their hands and it demands a strong character to ensure they come out victorious against South Korea on Monday and get a favourable result in the final Group H clash with Uruguay on December 2.
Livid at what he described as injustice and unfair officiating by American referee, Ismail Elfath, the Ghana coach admitted he is under pressure to turn the Black Stars campaign around, beginning with Monday’s clash at the Education City Stadium where that have no other choice than to beat the Koreans who were held to a scoreless draw by Uruguay last Thursday.
Similarly, the experienced Ayew is drawing positives from their performance against the highly-rated Portuguese and rallying his teammates to raise their game in the upcoming matches to emerge stronger out of what looks a tough situation where they should expect no favours from referees.
'’We always come out of difficult situations. We need to stay calm, go home, relax and improve upon our performance. We need to try and score more and concede less," said Ayew, who scored to cancel out Cristiano Ronaldo’s controversial opening goal via a disputed spot kick.
Ayew, who is making his third appearance at the World Cup, has been through similar situations before, and as the leader he feels the weight of expectation than any other player. He is confident that the Black Stars, traditional slow starters in tournaments, would hit top gear when they face the Koreans who also need victory to enhance their chances.
For Otto Addo, he knows there will be no room for excuses about officiating in the upcoming matches. He will have to get his players hungry and motivated against the Asians on Monday as his team need nothing short of a win to get back into contention. And so too will the Japanese be looking forward to avoiding defeat before they take on group favourites Portugal next Friday.
“It will be very, very tough to beat South Korea because they are very tough. But now we have to win. We are under pressure but they are, too,” admitted the Ghana gaffer.
Against Portugal, Ghana played it tight in defence until a few errors gifted the Portuguese the chance to score. On Monday, the Black Stars cannot afford to make such costly slips because the Koreans could seize those moments to punish the Ghanaians.
On a number of occasions, this tournament has served some dramatic moments and upsets delivered by Asian sides. Saudi Arabia fought back from a goal down to beat Lionel Messi-led Argentina 2-1, Japan fought back from a goal deficit to stun Germany 2-1, and Iran silenced Wales 2-0 at the Ahmad Bin Ali Stadium yesterday.
These are red flags that Ghana must be wary of as the Koreans are quick on the ball and have quality players led by their talisman, Son Heung-min, of Tottenham Hotspur, who was fit to play with a face mask after his recent eye socket fracture.
For Monday’s match, Coach Addo and his assistants will have to work out a smart strategy to keep in check the pacy Koreans, who often enjoy a lot of ball possession. Against Portugal, the Ghanaians kept a tight defence but sporadically threatened their opponents' goal area and also showed some defensive naivety in the latter minutes of the game. Such errors could be costly against an Asian side which plays with a lot of passion and keep running throughout the game.
It is not clear if the Ghana coach will tinker with his starting line-up, but he still has a good bench with players such as Osman Bukari, Daniel Kofi Kyereh, Elisha Owusu, Jordan Ayew, Kamal Deen Sulemana, Antione Semenyo, Abdul Fatawu Issahaku, Denis Odoi and Gideon Mensah all being available for selection.
However, players such as Thomas Partey and Andre Ayew will have to seize the moment and step up to the plate as the team leaders from whom a lot will be expected to give the team the attacking thrust necessary to help break down the stubborn Asians.
Traditionally, Ghana improve as tournaments progress, but on Monday they must show that they have learnt useful lessons from their opening game loss and a readiness to win their upcoming matches and progress in the competition.