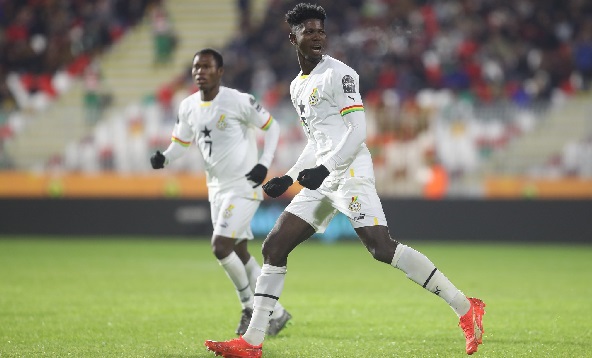 Ghana exhibited a five-star display to beat Sudan 3-1 in their second Group C game of the ongoing 2022 African Nations Championship (CHAN) to secure qualification to the quarter-finals of the tournament.

Sudan broke the deadlock in the 31st minute through Al-Gozoli Nooh after a very beautiful build-up to give Ghana’s opponent a deserved lead.

The Black Galaxies fought back to get the equaliser on the stroke of half-time through midfielder Konadu Yiadom who punched on a loose clearance to strike past goalkeeper Ali Aboeshren.

After the recess, Annor Walker's men resumed on another higher note, firing from all angles and looking to take the lead.

Their efforts paid off after 59 minutes when Ahmed Ahmed stepped on striker Daniel Afriyie Barnieh’s foot in the box to hand Ghana a penalty. Barnieh stepped up and scored the spot kick to give his team the lead.

Sudan fought hard to respond to Ghana’s lead but the Ghanaians were alert to avoid conceding another goal.

Ghana looked to have sealed the win in the 79th minute after Barnieh tapped in at a close range from Kofi Kordzi's cross but the goal was ruled out by the Video Assistant Referee (VAR) for offside.

Sudan faced a similar fate in additional time when their goal scored didn't stand after a foul was awarded against Mohamed Abdrahman.

The Ghanaian side were reduced to ten men after 90+6 minutes when captain Barnieh was shown a red card for stepping on the foot of an opposing player.

However, Jonah Attuquaye set up substitute Suraj Seidu to complete the win for the Galaxies a few moments to ensure Ghana end the encounter as 3-1 victors.