Ghana’s Black Galaxies made a winning start to their 2023 African Nations Championship qualifying campaign with a decisive 3-0 victories over the Junior Squirrels of Benin through a spot kick converted by forward Daniel Afriyie Barnie in the 25th minute and two second half strikes by Mohammed Alhassan (48th minute) and Skipper Gladson Awako (80th minute) at the Cape Coast Stadium on Sunday.

Barnieh’s spot kick was brilliantly executed, but the team’s second and third goals were classic by all standards and sent the sparse home crowd and the team in delirium.

After near misses in the first half following Barnieh’s opening goal, the Galaxies resumed the second half full of venom as they pushed their opponents into their half moments after play resumed

In one of their incessant attacks, Squirrels Skipper, Salim Fadal Bawa, who was hard pressed, pushed the ball out of play for a corner kick which was beautifully taken by full-back, Ibrahim Imoro. The ball found Jonah Attuquaye who also pushed it to onrushing Alhassan who quickly unleashed a volley which caught goalkeeper Adebiyi Marcel Serge Obassa flat-footed as he watched the ball fly past him into the back of his net before he could react.

Trailing by two goals, the Junior Squirrels built a strong wall in defence and also adopted an offside trap to prevent the Ghanaians from massacring them, but their effort yielded no dividend as skipper Awako scored the third goal which set the Cape Coast Stadium alight with drumming and dancing. 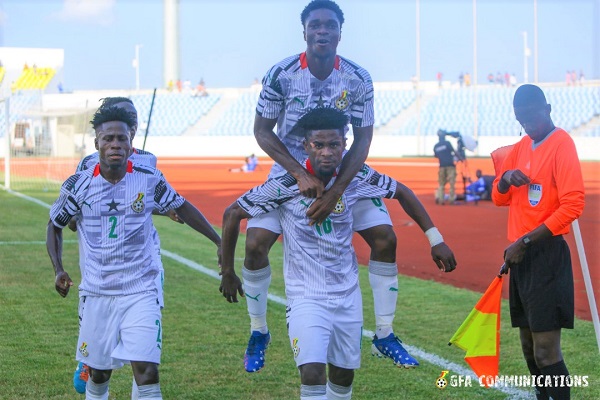 The goal was masterminded by Barnieh at the right flank when he outpaced two of his markers before sending an intelligent pass to Attuquaye outside the box. Without wasting anytime, the Legon Cities forward released the ball to Awako who had positioned himself just outside Benin’s penalty box.

And with two defenders marking him, the Ghana captain beat his markers before drilling a curling ball past goalkeeper Obassa who dived full length into the far corner of the post for Ghana’s third goal.
Moments after Awako’s goal, Barnie, a constant thorn in the flesh of the Squirrels, could have scored in the 82nd minute when he found himself in the box after outpacing his marker. But with the goalkeeper at his mercy, he chipped the ball over the bar to the amazement of the fans who were rising to greet another goal.

With three goals in the bag, the Galaxies drew rings round their opponents, pushing for more goals, but the defenders of the Squirrels, which revolved around Fadil Bawa, Boni Mouhizopu Sabi, Ronald Junior Beakou and Bio Odo Chabi were not only robust and physical but also swift in their counter-attacks.

The victory might have come the hard way, especially considering that the Galaxies had  missed the tournament since 2014 when they  bowed down 3-4 on penalties to Libya after a goalless draw in the grand finale.

Their opponents, who came to fight, might have lost the battle in Cape Coast, but they may give the Galaxies a good run for their money in the second round , hence the need for the Galaxies to correct all rough edges that denied them some scoring chances in yesterday’s match.