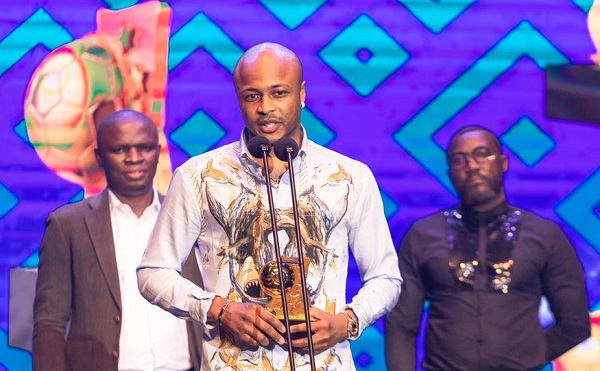 André Morgan Rami Ayew was named the Footballer of the Year at the 2021 Ghana Football Award held last Saturday in Accra.

Ayew's 17-goal haul over the 2020/2021 football season powered Swansea to the brink of English Premier League qualification but they fell short against Brentford FC in the Promotion Play-offs final.

Now a free agent after his contract with Swansea expired, Ayew scored twice to help the Black Stars secure qualification for the 2021 Africa Cup of Nations (AFCON).

"I am very honoured and proud to receive this award. It's been a difficult season, not just in football but the world with this COVID-19 so being able to stay strong mentally to do what I have to do mentally, today getting this is a good sign of hard work and I need to continue because there's a lot more to do," he said.

"It means that I can't hide behind the fact that the entire nation has a lot of hopes in me to do something to make sure that we qualify for the World Cup and try and bring a trophy home, I can't hide from that".

Speaking about his three-year stint at Swansea, Ayew said he was grateful to Swansea fans for their support but was saddened that the club fell short twice in the play-offs.

He said those losses now serve as a motivation to win more finals and trophies.

Ghana Premier League leaders, Accra Hearts of Oak were named the Male Team of the Year as two of their staff coach Samuel Boadu won the Men Coach of the Year award and midfielder Ibrahim Salifu who has won seven Man of the Match awards claimed the home-based Player of the Year award.

See the list of winners for the various categories below:
FOOTBALLER OF THE YEAR - Andre Ayew

GOALKEEPER OF THE YEAR - Danlad Ibrahim

MALE TEAM OF THE YEAR - Hearts of Oak