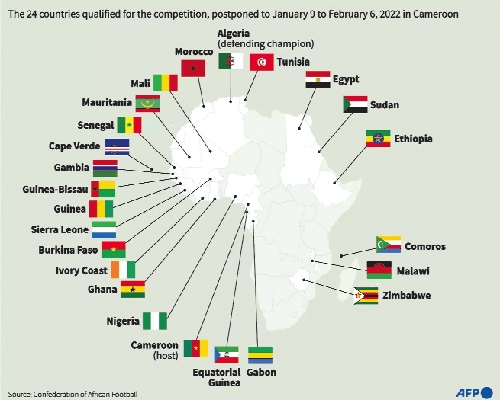 The 2021 Africa Cup of Nations (AFCON) kicks off tomorrow in Yaoundé as the continent's leading teams and players battle for honours over the next four weeks, with defending champions Algeria, Senegal, record titleholders, Egypt and host Cameroun among the favourites to win the title.

Apart from Senegal, who were twice beaten finalists, the other three nationals share a total of 14 titles among them. This time, however, Ghana’s Black Stars — the first team to win four titles in 1982 — are not among the pre-tournament favourites, but are among the outsiders who can pull a surprise in the continent's flagship competition.

The Indomitable Lions of Cameroun get the competition underway when they play Burkina Faso -- runners-up at the 2013 tournament in South Africa -- at the magnificent Stade d'Olembé in Yaoundé tomorrow (kick-off 16:00 GMT).

Five-time African champions, Cameroun, will be under pressure to get off to a winning start as they aim to win the tournament on home soil for the first time (when they first hosted the competition in 1972, Congo ran away as winners after beating Mali 3-2 in the final), but they face a tough challenge from the Desert Foxes of Algeria, Teranga Lions of Senegal and seven-time champions Pharaohs of Egypt.

Opening games have always been difficult for host nations who play under a lot of pressure, but the experienced and talented Camerounians will aim to roar loudly as a declaration of intent before what appears to be easier clashes against Group A rivals, Cape Verde and Ethiopia who meet in the second match of the day.

With home advantage, the Lions have a responsibility to improve upon their last performance where they exited the 2019 AFCON at the Round of 16. Although not the powerhouse of the 1980s when they dominated the competition, the hosts have standout names such as Ajax goalkeeper, Andre Onana, Napoli’s on-loan Fulham midfielder, Andre-Frank Zambo Anguissa, and Bayern Munich striker, Choupo-Moting, who are determined to impress in front of their own supporters.

Champions Algeria begin their title defence in imperious form and have a relatively easy opener against Sierra Leone before meeting Equatorial Guinea and even Cote d'Ivoire in Group E.

Following their recent Arab Cup victory, the Desert Foxes head to Cameroun, confident of defending their crown and will again look to their star man, Mahrez, whose free-kick won them the second AFCON title in 2019, for inspiration in Cameroun.

For Ghanaians, all eyes will be on Monday's clash between the Black Stars and the Atlas Lions, but there are other key encounters to look forward to in the January 9 — February 6 tournament at the five venues.

On Tuesday, three-time champions, Nigeria, will lock horns with the most successful team in the tournament (seven titles), Egypt, in one of the biggest encounters at the Group stage.

Two-time winners Cote d’Ivoire and Egypt are expected to sell out one of the best games of the tournament when they meet on January 20 in what could be a Group E decider.

On Wednesday, 2004 champions, Tunisia, and Mali are expected to give a good account of themselves in Group F with an old rivalry between Egypt and Sudan set to be at play when they slug it out on January 19.

The tournament was first scheduled to start in June 2021 but was subsequently brought forward to January last year to avoid the tropical rainy season in Cameroun. It was dealt another blow by the COVID-19 pandemic which ravaged the global sporting calendar last year and forced another postponement of the biennial tournament.

Group A teams, Cameroun, Burkina Faso, Ethiopia and Cape Verde will be based in Younde to play at the Olembe Stadium.

Giants Senegal, Zimbabwe, Guinea and Malawi will play their Group B games at the Kouekong Stadium in Bafoussam.

In Group C, Ghana, Morocco, Comoros and Gabon will compete at the Stade Ahmadou Ahidjo in Yaounde.

Nigeria, Egypt, Sudan and Guinea-Bissau are based in Garoua where they will lock horns at the Roumde Adjia Stadium in their Group D encounters.

The Japoma Stadium in Douala and Limbe Stadium will host the Group E and Group F fixtures respectively.

Group E has the likes of reigning champions Algeria, Cote d’Ivoire, Equatorial Guinea and Sierra Leone competing while Tunisia, Mali, Mauritania and Gambia will slug it out in Group F.

With the flagship tournament on the continent, Africa is expected to have its top players in action for their countries.

From arguably the best player on the continent, Mohammed Salah of Egypt to his Liverpool teammate Sadio Mane (Senegal), this year’s AFCON is expected to be a thriller.