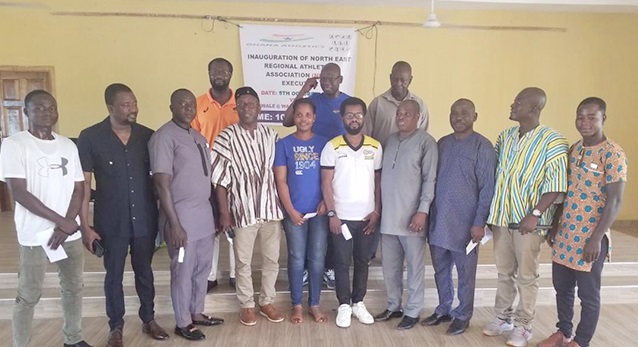 The new executives with Seth Panwum (4th from left), the Board Chairman, NSA, and the executives of the GAA
30.5k Shares

A seven-member executive chaired by Duut Daniel Janamah has been inaugurated to steer the affairs of the newly formed athletics association for the North East Region.

The ceremony, which took place at the Walewale Social Centre, was made possible through a partnership between the Ghana Athletics Association (GAA) and the National Sports Authority (NSA).

Bugari Saasi is the vice-chairman, with Kenneth Francis doubling as the secretary and technical director.

The ceremony was graced by the Board Chairman of the NSA, Seth Panwum (Boyoyo), the president of the GAA, Afelibiek Ababu, the CEO of the GAA, Bawah Fuseini and other GAA officials.


Mr Panwum, who swore in the new executives, urged them to be innovative and assertive to unearth more talents from the area.

He said measures were being instituted to enable the Northern Zone to host the next national cross-country race next year and expressed the hope that the executives would work to enhance the development of sports in North East.

Mr Panwum further appealed to the executives of the GAA to support the new regional executives to execute their task as required.

He later presented a whistle and a stopwatch to the elected officials.

Mr Fuseini observed that the North East Region had a lot of potential in terms of athletics and encouraged the new executives to work assiduously to unearth and groom them.

He said the “North East Region today had Tia Kologo, who was a second best long-distance runner in the country and that more Kologos are around for the executives to identify”.

The newly sworn-in chairman, Mr Janamah, for his part, called for support from the national executives and gave the assurance that they would work to grow athletics in the North East Region.