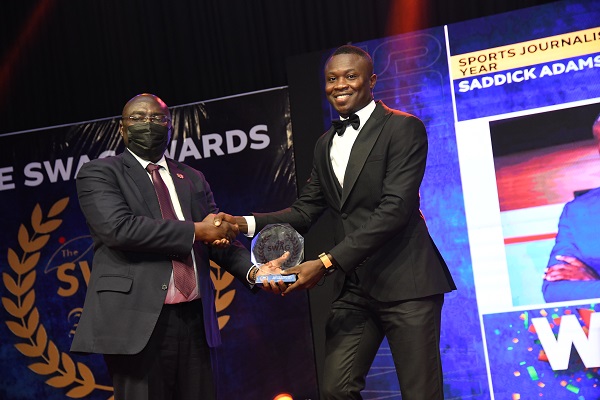 The Vice President, Dr Mahamudu Bawumia, has urged stakeholders in the Ghanaian sports industry to embrace government's digitisation drive to maximise the potential of sports to the youth and the Ghanaian economy.

Speaking as the Distinguished Guest of Honour at the 46th SWAG Awards in Accra last Friday night, Dr Bawumia stressed that sports had become a global industry providing opportunities for the youth and contributing immensely to economies around the world.

However, the Ghanaian sports industry, the Vice President noted, was lagging behind and had not realised its potential due to the failure to take advantage of the evolution of sports in different eras.

“In a recent interview with the CNBC, I said that Ghana cannot miss out on the 4th Industrial Revolution after missing out on agriculture, industrial and ICT revolutions. Tonight, I want to state, and urge all sports stakeholders in Ghana, that Ghana sports cannot afford to miss out on the opportunities of digitalisation after missing out on television revenue and sustainable sponsorship," Dr Bawumia said.

"The digitisation agenda of the government offers sports entities in Ghana a unique opportunity to transform their brands and maximise their revenue stream through e-membership, e-ticketing and e-commerce," he added.

"By adopting the concept of digitisation, which is the norm for all sports brands around the world, Ghanaian sports entities, especially football clubs, should be able to rake in more revenues from their fans, even if they are a few thousands of fans."

The Vice President said there couldn’t be a better time for the Ghanaian sports industry to embrace the use of digital technology as means of generating income after the growth of the sports was badly affected by the impact of COVID-19.

Advancing a strong case for digitisation by Ghanaian sports entities, he referenced how clubs in Europe were able to keep themselves afloat during the peak of the pandemic through digitisation, when competitions were suspended and games were played in empty stadia.

He stated: "Thanks to the power of television and other digital technologies, a number of leagues and competitions that were temporarily suspended returned, and millions of people around the world were reached and served their favourite sports, even as the world strived to find a solution to the pandemic. And thanks to the power of sponsorship, merchandising, and digital technology, a number of European football clubs kept themselves afloat and to a considerable extent survived the debilitating impact of the pandemic. Even though these clubs and sports federations lost revenues due to the economic impact of the pandemic, their core operation was not affected, and most of them did not require stimulus packages to survive."

The Vice President noted with disappointment how the story was different in Ghana, in particular, and Africa in general where sports federations and clubs were limited in maximising opportunities in television, sponsorship packages and e-commerce, even as they played in empty stadia.

He added that the negative impact of COVID-19 on sports in Ghana should be an opportunity for all stakeholders to reflect and take a second look at what they had been doing in Ghana sports that has not gone on well, especially their inability to leverage on media rights, sustainable sponsorship and lately digitisation.

Dr Bawumia assured members of the sports fraternity of the commitment of the government to support the development of sports in the country to provide more opportunities for the youth.

To buttress government's commitment, the Vice President listed a number of investments the government had made in sports infrastructure development and promotion of sports in the past five years.

These included the renovation of the country’s major sports stadia, ongoing construction of 10 multi-purpose youth sports centres in 10 different regions, COVID-19 stimulus packages to the sports industry, investment in sports national teams, as well as the decision to host the 2023 African Games in Accra, which he said would ensure the provision of infrastructure for other sports disciplines.

Dr Bawumia, who had earlier supported SWAG towards the organisation of the awards, also presented GH¢10,000 each to the Female Footballer of the Year (Janet Egyir) and the Sports Journalist of the Year (Sadick Adams of Angel TV).