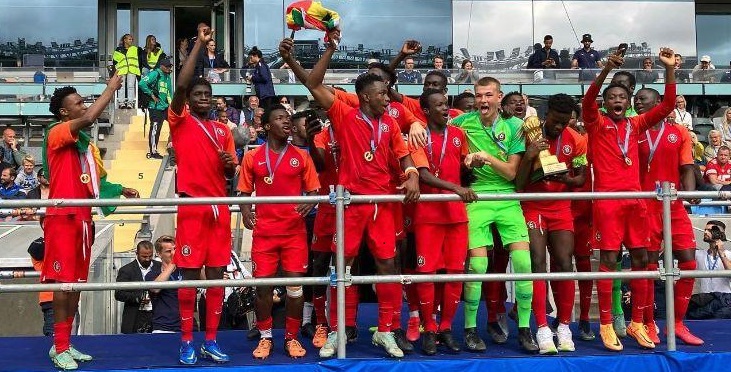 Right to Dream (RTD) Academy made history last Saturday after recording their sixth Gothia Cup triumph in Sweden with a 4-2 thrashing of Swedish side, BK Hacken, in the final.

The Ghanaians showed their class throughout this year's edition of the world's biggest youth tournament without dropping a point in the six matches they played.
Going into the competition with five back-to-back trophies to boast of, the Ghanaians were simply unstoppable as they scalloped all their opponents with ease to reach the final.
Right to Dream began their explosive campaign with a morale-boosting 3-1 victory over IFK Norrkoping of Sweden, followed by a 6-0 whitewashing of IFK Goteborg last Tuesday.
On Wednesday, RTD continued their scoring spree by thumping Mexico's Rayados de Monterrey 5-1, followed by a commanding 3-0 win over another Swedish side, Helsingborgs IF, on Thursday.
In Friday's semi-finals, RTD made light work of Italian side, Audax FC, to book a date with BK Hacken in the final.
However, the story was no different as the Ghanains tamed their opponents with an emphatic 4-2 victory to establish their dominance and lift the enviable trophy at stake.
Right to Dream's success story in the Gothia Cup began in 2013 when they finished. Since then, they have never looked back.
The team drew inspiration from that feat to win the successive tournaments from 2014 to 2019, only to maintain their clean record this time around.
Disclosing the team's achievement to Daily Graphic in an interview on Sunday, the Technical Director of Right to Dream Academy, Mas-Ud Didi Dramani, commended the players for exhibiting Ghana's brand of football to the world once again in such an impressive manner.
He also acknowledged the impact of the Danish Embassy in supporting and facilitating the process towards this great achievement and thanked them on behalf of the management of RTD. "We are grateful to them for aiding these potential talents to showcase the RTD and Ghana's brand of football to the rest of the world in a well attended youth tournament as Gothia.
"The RTD organisation is very grateful," he added.
Follow @Graphicgh