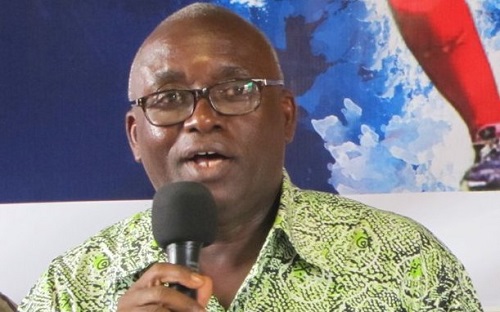 Richard Akpokavie has left his footprints in the sands of time. He has been associated with hockey for close to five decades and has been a key part of the forward march of the sport in different capacities both as a player and as an administrator.

Currently the General Secretary of the Ghana Olympic Committee (GOC), the legal practitioner is a former president of the Ghana Hockey Association but his long association with the sport dates back to his school days when he first held the hockey stick.

Years later he became famed for being one of the youngest players to play for the senior national team at the age of 16 while he was a student of Achimota School in Accra.

Besides helping his school to win the acclaimed National Hockey Championships during a national sports festival held at Navrongo in 1975, he also captained the national team for more than a decade and led Ghana to win many laurels.

After hanging up his stick in 1994, Mr Akpokavie felt the need to bring his vast experience on the field to bear on the development of hockey as an administrator.

First, he joined the Greater Accra Hockey Association as its secretary and then rose to become the Vice President of the GHA.

In 2009, he was elected as the Vice President of the GHA and four years later he rose to become the head of the national federation.

As an influential member of the GHA, Mr Akpokavie pushed hard for the formation of the national Under-17 team which competed for honours in South Africa in 2009 to represent Africa at the 2010 Youth Olympics in Singapore.

It was during his tenure as the national hockey chief that the female and male national teams consistently competed and won laurels at the continental and occasionally featured in the Hockey World League Series as worthy representatives of Africa.

Through his hard work and commitment to duty the male and female national teams in 2016 participated in the second round of the Hockey World League Series in Bangladesh and Spain in 2017.

Recalling his playing years at Achimota School, Mr Akpokavie revealed that he was a good footballer until he was introduced to the sport and handed his first hockey stick in 1973. It marked the beginning of an amazing story of a precocious talent who made a positive impact with his dribbling skills, speed and striking prowess which caught the attention of many.

“It was in 1973 that I saw a hockey stick for the first time and saw students playing hockey. Before then, I was playing active football and other sports disciplines, but at Achimota School I fell in love with hockey.

This was because hockey sticks were available in their numbers, so through some seniors such as Francis Dodoo, Ian Quartey, Johnny Aidoo and my brother Fred Akpokavie, I got involved in the sport,” he recalled.

He admits Sam Portuphy, a man he calls his "godfather in hockey," had the biggest influence on his playing career. Mr Portuphy gave young Akpokavie the breakthrough to play competitively at a time he was yearning to play in the Achimota hockey team.

“If today I have achieved anything in hockey, then all the praise should go to Mr Portuphy because as a person in charge of the Old Achimota Association (OAA) hockey club, he saw my potential and invited me, together with two of my schoolmates, to join the club to play in the Greater Accra Hockey League.

“That was how I started competing for honours in hockey, and that also marked the beginning of my career in the sport,” Mr Akpokavie explained.

A few months after his involvement in the Greater Accra Hockey League, the promising star got a chance to participate in a national hockey festival where he excelled and earned an invitation into the national hockey team at the age of 16.

During the national sports festival in 1976, the teenage sensation impressed the technical directors of the competition, Messers S.S. Baah, K.N. Owusu (who later became GOC president) and their team who invited him to join the national team.

In 1978, he was part of the Ghana team that played in the African qualifiers in Ibadan, Nigeria, alongside Kenya, Egypt and Nigeria. The Ghanaian side won the maiden championship and represented Africa in the first ever Junior World Cup in France.

Subsequently, Akpokavie captained the junior national team for the second Junior Africa championships in 1981 and two years later, he was promoted to the senior national team and participated in the Africa Cup of Nations.

Many years on, Mr Akpokavie occasionally picks the stick to play hockey for fun due to his advanced age but feels the game is still saddled with many challenges, particularly the lack of modern infrastructure and equipment, and not offering talented youth opportunities to hone their talent and develop the sport.

“The inter-schools are not as competitive as it used to be in our time. This is due to lack of infrastructure, hockey sticks and technical support to nurture and develop skills. Another issue is inadequate artificial turfs in the country.

At the higher level we should play regularly in competitions to keep our players ahead or at par with their peers. After the last Commonwealth Games in 2018, we have not played any major competition for three years so how can we compete with our peers in future tournaments?" he queried.

He says he believes it is time to get more private funding into the sport to develop the right infrastructure and focus on school sports as the backbone for the sport's development.