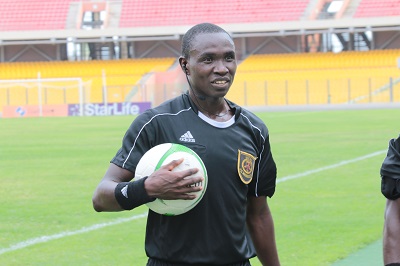 Premier League referee, Gabriel Opoku Arhin, has been slapped with a six-match ban for ignoring a red card offense during Asante Kotoko’s game against Bechem United at the Baba Yara Stadium on November 7.

A ruling by the Match Review Panel believed Asante’s Kotoko Ismael Abdul Ganiyu who committed a serious offense against Emmanuel Avornyo of Bechem United deserved to have been showed the exit by the referee.

The panel believed referee Arhin failed to apply law 12 of the game which bothers on Fouls and Misconducts and allows referees to expel any player that uses excessive force which endangers the safety of an opponent.

Referee Arhin had stated in his defense that he could not immediately see from the distance he was standing and after consulting with the fourth referee, Andrew Awurisa, he decided to hand the minimal sanction of a yellow card.

According to the panel, the referee and the fourth official admitted they erred after watching videos of the incident while the Assistant referee Two, Alex Osam-Nyarko, also claimed not to have clearly seen the incident due to the distance.

Based on this, the panel which was chaired by Dr. Francis Eyiah Bediako, has decided to suspend referee Arhin for six matches while the fourth referee has been handed four match suspension.