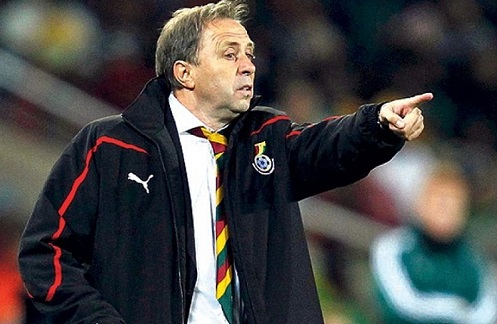 BLACK Stars Coach, Milovan Rajevac, has described the possibility of qualifying to next year’s FIFA World Cup in Qatar as the main goal of the team.

Coach Rajevac explained that his technical team was ready to do their possible best to ensure Ghana makes her fourth World Cup appearance after missing out on the last edition in Russia.

While naming a 28-man squad ahead of Ghana’s final qualifiers against Ethiopia and South Africa in Accra last Thursday, the Serbian trainer stated that leading the Black Stars to Qatar 2022 would be a dream come true for his technical team and the GFA as a whole.

“Qualifying to the World Cup has been our agenda since taking over as coach of the team,” said Rajevac.

“Everyone here is doing his possible best to ensure we make it to Qatar,” he added.

“This remains our main goal and we are ready to do everything possible within our power to make it happen,” he gave the assurance.
Coach Rajevac handed maiden call-ups to teenager Felix Afena Gyan and Edmund Addo in his 28-man squad for this week’s FIFA World Cup final Group G qualifiers against Ethiopia and South Africa.

Gyan, an 18-year-old forward with Italian side AS Roma, together with 21-year-old Addo of Sheriff Tiraspol, will have the chance to play in the senior national team for the first time.

The Serbian also invited returnees, Richmond Boakye-Yiadom and Asante Kotoko’s Ismail Abdul Ganiyu for the two games against Ethiopia and South Africa in Johannesburg and Cape Coast on Thursday and Sunday, respectively.