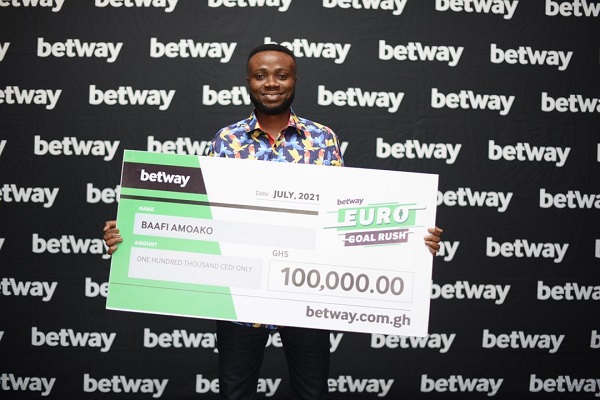 An Akwatia-based punter, Mr Amoako Baafi has emerged as the winner of the GH₵100,000 grand prize of the Betway Euro Goal Rush Promotion.

Baafi topped the leaderboard with a total of 398,741 points. For the promotion, each bet placed earned him 3 points for the leaderboard and each prediction earned him additional points based on the position of the goalscorer he chose.

At the end of the promotion – which took place from June 11 to July 11 – 22 Betway customers also walked away with the matchday prizes.

At a ceremony to hand over the cheque to Baafi, Country Manager – Marketing at Betway Ghana, Kwabena Oppong-Nkrumah mentioned that as the organisation marks its fifth year of operations in Ghana, sports betting fans are to look out for more rewarding and engaging promotions from the leading sports betting company.

“Over the past five years, we have run a number of exciting promotions which have seen our players win a number of real-world prizes. We remain committed to offering our players a world-class gaming experience and look forward to rewarding our loyal customers,” he said.

He added that entry into the Euro Goal Rush leaderboard promotion was free and all daily winners have had their Betway accounts credited with their cash prizes.