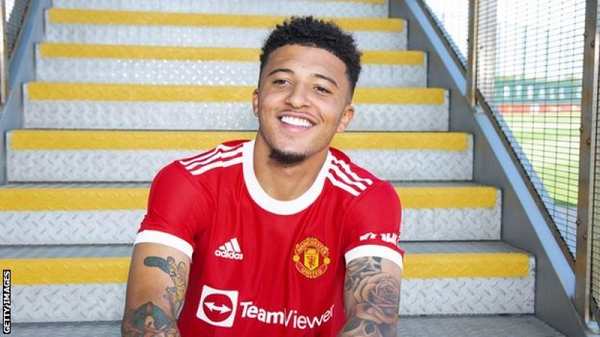 Sancho is the second most expensive English player of all time behind his new United team-mate Harry Maguire.

He joins United on a five-year deal.

"I'll always be grateful to Dortmund for giving me the opportunity to play first-team football, although I always knew that I would return to England," 21-year-old Sancho said.

"The chance to join Manchester United is a dream come true and I just cannot wait to perform in the Premier League.

"This is a young and exciting squad and I know, together, we can develop into something special to bring the success that the fans deserve."

United agreed the fee for Sancho on 1 July and his five-year contract with the club has a further 12 month option.

The completion of the deal brings to an end United's protracted pursuit of former Manchester City player Sancho. They had expected to sign him last summer but could not agree a fee.

Sancho scored 50 goals and registered 57 assists in 137 appearances for Dortmund.

United boss Ole Gunnar Solskjaer says Old Trafford will give Sancho "the platform he needs to release his untapped talent".

"Jadon epitomises the type of player I want to bring to the club - he is a forward player in the best traditions of Manchester United," Solskjaer told the club website.

"He will form an integral part of my squad for years to come and we look forward to seeing him blossom. His goals and assists records speak for themselves and he will also bring tremendous pace, flair and creativity to the team."

Sancho's return to the English game comes after he helped the national team reach the final of the European Championship, where they were beatenon penalties by Italy.

The former City youth player, along with Bukayo Saka and now United team-mate Marcus Rashford, were subjected to racial abuse on social media after they failed to score in the decisive shootout.

Sancho's move to Old Trafford will see him not only link up with England team-mate Rashford, but also Edinson Cavani, Anthony Martial and Mason Greenwood in what could prove a formidable attack for Solskjaer's side.

Sancho scored 16 goals in all competitions during the 2020-21 season, five fewer than Rashford, but four more than Greenwood, and nine more than Martial. Cavani, who joined United on a free transfer last year after leaving Paris St-Germain, netted 17.

In four seasons at Dortmund, Sancho notched 57 assists and created 65 big chances, more than Rashford, Martial, Greenwood and Cavani during the same period.

Sancho also stacks up well when compared to some of the biggest names in Europe.

Since the start of the 2018-19 season, only seven players have more combined goals and assists than the England international. Of those players, only Barcelona's Lionel Messi (43) has created more goals than Sancho (41) in that time.