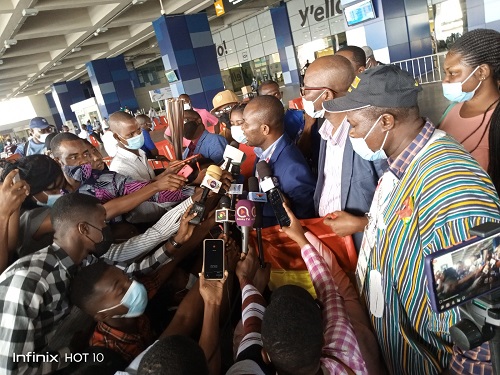 The Director General of the National Sports Authority(NSA) Professor Peter Twumasi says government will soon start the schools sports to complement the huge sports infrastructure it is currently constructing across the country.

He added that his outfit would also embark on an initiative to recruit talents nationwide targeting talents from the least-financed sporting disciplines.

Professor Twumasi made these remarks when he, together with other members of the Ghana contingent in Tokyo, arrived at the Kotoko International Airport this afternoon.

“ I will endeavour to make the least-financed sporting disciplines my priority going forward  and together with the Sector Minister, hunt for talents and invest in them for the future,” he stated.

He stated that Samuel Takyi’s feat of becoming the first Ghanaian boxer to win  a bronze medal after 29 years makes a case for the least-financed sports.

Professor Twumasi also promised to work together with all the national federations to make sports an avenue for job creation for the youth.

He called on all stakeholders in sports to lead a concerted effort towards making Ghana, a sporting hub in Africa.