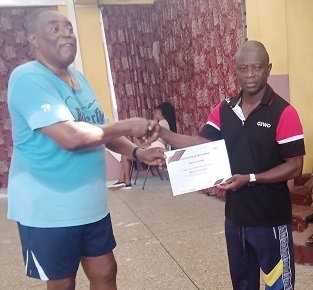 The 58-year-old Chief Inspector and the 2001/2002 national champion defeated Abrefa 2-1 in the preliminaries of the Homowo tournament staged at the D.G. Hathiramani Hall three weeks ago.

At a brief ceremony held at the Seven Great Princes Academy at Dansoman in Accra last Saturday, the President of the VTTAG, Mr Christopher King, noted that the honour was in recognition of the splendid display put up by the former Black Loopers member and the 2001 SWAG Award winner.

“We also want to use the occasion to tell the public that veteran table tennis players are still capable of rubbing shoulders with the current generation of players, hence must not be overlooked,” he stated.

Role of veteran players
Mr King recalled that at the just-ended Birmingham Games, the gold and silver medals went to two veterans who have played the game for over three decades.

“Table tennis is a sport that is ageless and regardless of one’s age and condition. So far as his hands and minds are able, he can perform wonders and be on top of the world,” he noted.

He, therefore, called on the government to invest in the sport to create jobs for the youth and make future world champions out of it.

Chief Inspector Aboagye thanked the VTTAG for the honour and pledged to continue playing and also impart his skills to the youth to produce future national champions.

“Table tennis is a sport that should never be underrated and it is going to become the number one sport in the country again like it was in the past with the backing of the government and other stakeholders,” he assured.