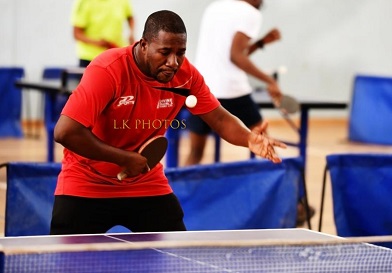 In a gruelling encounter, both sides spun and smashed with their rackets to get the better of each other.

However, Ninson took the scruff of the neck in the second set and dominated his opponent to secure a decisive 3-1 victory.
He received a trophy, a gold medal and the privilege of amassing the highest number of points of the tournament to complement his overall cumulative ranking points.

Master Ninson on his way to the finals had the daunting task of defeating previous winners of the tournament such as James Aryee of Faith Table Academy, Mamprobi, Emmanuel Daitey of Ghana Fire Service and former national athlete Samuel Ashitey Armah of the Ghana National Fire Service to progress to the final.

The event, which is the seventh successive ranking tournament in the 2021 calender year, was organised by the Veterans Table Association Ghana (VTTAG).

The 6th ranking tournament was held earlier on  December 3, 2021 at the Agona Swedru Roman Catholic Parish which was won by Joseph Oware of Kumasi Table Tennis Club.

In his speech, the Vice President of VTTAG, Mr Jason Onyameh, thanked all the veteran players for their support throughout the year and reminded all members of their responsibility to keep the association going.

He added there were several activities and projects outlined in year 2022 to help promote the game of table tennis in the country.
In his closing remarks, he mentioned that the year 2022 would see several veteran players participating in international veteran tournaments in spite of COVID-19 challenges.

“Covid-19 is real so let’s all observe the protocols outlined by the Ghana Health Service and keep playing table tennis.” he noted.

The VTTAG expressed gratitude to Seven Great Princes Academy and Street Sense for their support.