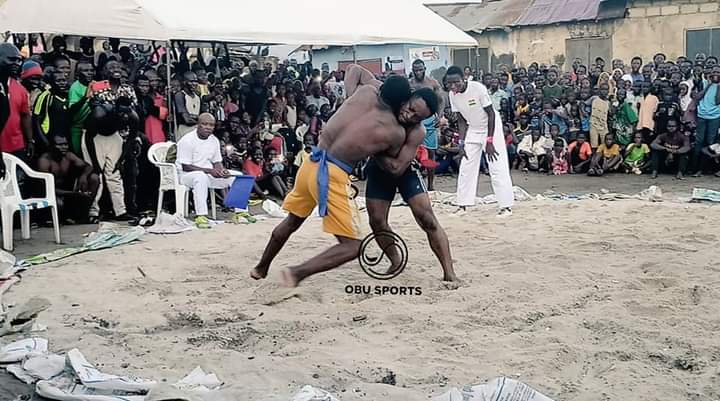 Spectators watch two wrestlers slug it out at the 76kg category

The tournament was organised by the Ghana Wrestling Association (GWA) to hunt for talents for the upcoming national open championship.

Among the winners were Daniel Zamrama who flipped Seyram Tsidi’s back to the ground to win the men’s 100kg event.

Fuseini Issah won the men’s 120 kg category after his challenger failed to turn up.

All the winners were awarded trophies, certificates and automatically gained a place in the national team.

National Championship
After the competition, GWA President, Master Norbert Amefu, disclosed that a National Open Championship would come off in December with an Olympic Greco-Roman freestyle wrestling at the Accra Stadium.

“This competition will select wrestlers for the national cause and hone their skills for future international competitions such as the African Games and the Olympics Games,” he said.
He further revealed that another traditional wrestling championship was in the offing in the Greater Accra Region before the end of the year to continue the selection process for the national team.