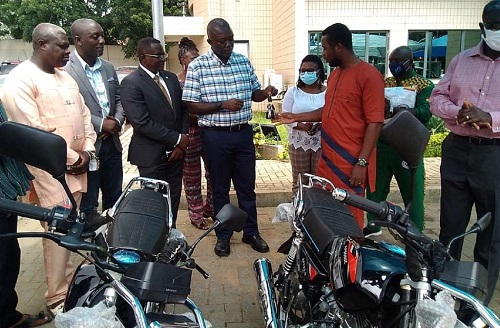 The CEO of Mobility Technologies, Francis Boateng, has donated two Apsonic motorbikes to the Ghana Olympic Committee (GOC) to aid their work and to also facilitate the delivery of Information from the GOC to its stakeholders.

Mr Jonathan Tetteh, a representative of Mobility Technologies, stated that it was the desire of Mr Boateng to see an effective and efficient GOC, hence the donation.

"During the Queen's Baton Relay, a dispatch rider was asked to deliver an Information to our office with a GOC motorbike, but we saw that the motorbike was defective and he was struggling to use it, so we decided to support the outfit with two motorbikes," he explained.

He reiterated Mobility Technologies' resolve to see the GOC make sports a great avenue where the youth could generate revenue for national development.

He gave an assurance that his outfit would continue to support the GOC and make it a workable institution for youth employment and sports revolution in Ghana.

The President of the GOC, Mr Ben Nunoo Mensah, thanked the donor and recalled how a year ago the same company furnished the GOC office and lauded them for their unflinching support for the GOC.

He noted that the GOC was very much committed to sports development and that all sporting disciplines would be supported.

"The GOC is there to promote and develop Olympic sports, and we have never reneged on that. We will continue to support all sporting disciplines and develop sports in the country," he pledged.

The deputy treasurer of the GOC who received the bikes on behalf of the GOC pledged to use them for its purpose to achieve the said objectives.

He thanked Mobility Technologies for its support.

Meanwhile, Mr Nunoo Mensah has donated 10 metallic chairs to the GOC to support its administrative work.

He noted that the chairs would go a long way to support the work of the GOC.

"As a president, I must always lead by example, and just as I donated motorbikes and other materials to aid the work of the GOC, I'm also donating these chairs to support the GOC office in its day-to-day activities," he stated.
He seized the opportunity to thank the media for their relentless support to the cause of the GOC.