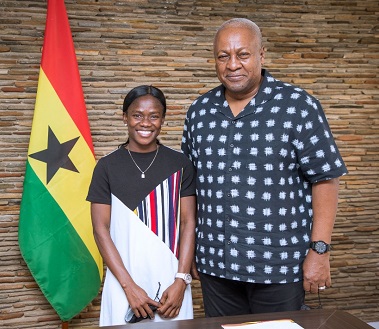 Martha Bissah, the Junior Olympics gold medallist, has expressed gratitude to former President Mahama for his support in her sporting endeavour.

" I will like to thank the former president for all he has done for me," she stated.

Last Wednesday Bissah visited the office of the former president, where she was well received by him.

The former president noted that he was expecting her to perform at the just ended Olympics, and expressed the hope that her impasse with the GAA would be resolved for her to win more gold medals for Ghana.

It could be recalled that in the Tuesday edition of the Daily Graphic of August 17, where Martha’s visit to the former president first appeared, it was inadvertently stated that Madam Phyllis Engmann was a former national athlete, which was not so.

It was also stated that Martha met President Mahama at his residence instead of his office at Cantonments in Accra.