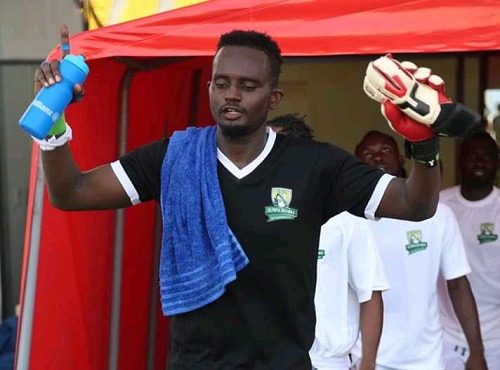 Elmina Sharks goalie, Laud Bawa Martey, is aiming at making the final Black Stars squad to play against South Africa and Sao Tome and Principle in the qualifiers for the 2021 Africa Cup of Nations (AFCON) tournament.

Martey is among the 32 home-based players called by Black Stars coach, Charles Kwablan Akonnor, to start preparation ahead of the qualifiers.

Though elated by the call up which he described as a prove to his hard work this season, the 23- year-old hopes to cease the opportunity to break into the final team Coach Akonnor will name later for the two matches.

“When I heard that my name was mentioned in that squad, I was very happy, I had a feeling of a dream come true because this is my first ever national team call up. It is the dream of every player to wear a national team jersey.

“The most important thing is to make it to the final team that will be named for the Black Star matches. I am working very hard to be part of the final and thus what I aim at. “Martey told the Graphic Sports online in an interview.

The former Proud United player acknowledged the competition he was going to face in the team but still maintained that he was confident he will make the cut adding that he confidence had been boosted by the call up.

“Those keepers who were also called are my seniors but it does not scare me. What I must do is to prove my worth and show everybody why I deserve to be in the call-up. I believe the coaches saw something in me that is why I was invited and I will prove it.

'" This call-up has boosted my confidence. I hope this is the beginning of new things in my career,” he remarked.