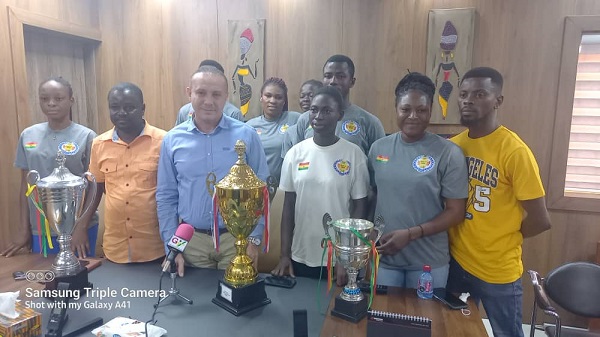 The Chairman of Samir Engineering and Trading Company Limited, Mr Nazem Karroum, has pledged his support for the development of volleyball in the country through sponsorship for El-Wak Wings Volleyball Club.

Speaking to the Daily Graphic in an interview after the club had presented their African Intercontinental Championship trophy which they won in Burkina Faso recently, the chairman admitted that volleyball was one particular sport that had been neglected and the only way to whip up interest was through support for the teams.

“Volleyball, a least financed sports, represents the spirit of our company which stands for resistance and good performance and it is for this reason that we decided to give our ultimate support to promote the sports beyond what we see today,” he said.

The founder and owner of El-Wak Volleyball Club, Mr Divine Edem Dotse, was proud the team had made history by becoming the first civilian team to have won an international trophy and acknowledged the immense contribution made by the company in achieving it.

“Since the introduction of volleyball in Ghana in 1978, there has not been any civilian team which has won a trophy in Ghana. This is the first time a team from Ghana has won a trophy. This honour, I must say, would not have been possible without the support of Samir Engineering, led by a generous chairman in the person of Mr Nazem,” he announced.

He expressed gratitude to the company for their contribution in ensuring the team was successful and promised to do more with the support of the company.