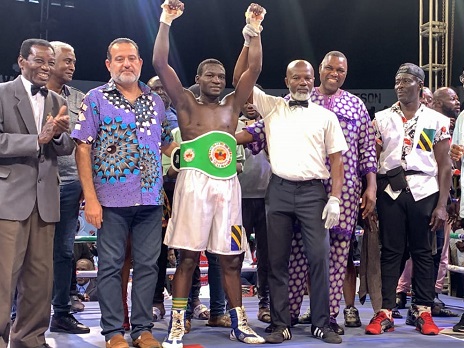 Loren Japhet (middle) being crowned as the winner by Roger Barnor supported by Fadi Fattal(left) and other members of his team
30.5k Shares

An intense 10-round encounter which headlined the DE-LUXY Professional Boxing League Fight Night 13 at the Bukom Boxing Arena in Accra last Saturday night saw Japhet working hard on his opponent's body and head in the latter rounds to convince the three judges to score the fight 99-91, 97-90 and 98-91 in his favour.

It took his career record to 15 wins with two draws and five losses, while Imoru suffered the first defeat of his career.

The 25-year-old Tanzanian, managed and trained by Ghanaians, embarked on fierce exchanges with Imoru, 29, in the first round but got caught by a strong right punch to the chin which sent him crashing onto the canvas. He quickly got back to his feet after beating the mandatory eight-count, and resumed normal duties with some combinations before the end of the round.

In the second round, Japhet, whose win yesterday made it 15 for him professionally with five losses and two draws, landed some clean shots to the face of his opponent and followed it up with a combination to win the round.

He repeated same in the third round, however, getting to the end of the round, Imoru tailored a left jab to his face to get some points of his own.


The Beninese used that late surge to gain momentum in the fourth round when he sent his opponent onto the ropes with a straight right with the crowd cheering in response.

Japhet, a southpaw, dazed his opponent in the fifth round with a powerful right hook before unleashing another right to startle his stubborn opponent.

He continued staggering his opponent with combinations in the sixth and the seventh rounds as the crowd roared in admiration.

In the seventh round after a hefty onslaught ,he walked to his corner as they doused him with water.

The Tanzanian sent his opponent to the canvas in the ninth round with a powerful left hook before making him wobble with some combinations in the 10th round.

After being crowned the champion, he vowed to fight on and get closer to the world title.

In other supporting bouts, Michael Offei of the Attoh Quarshie Gym made light work of Eric Amershiorkor to win their six-round super featherweight contest by a unanimous points victory, while Mohammed Fuseini of the CQB Foundation recorded a first round technical knockout win over Arnold Adso of Palm Springs Gym in their six-round bantamweight contest.