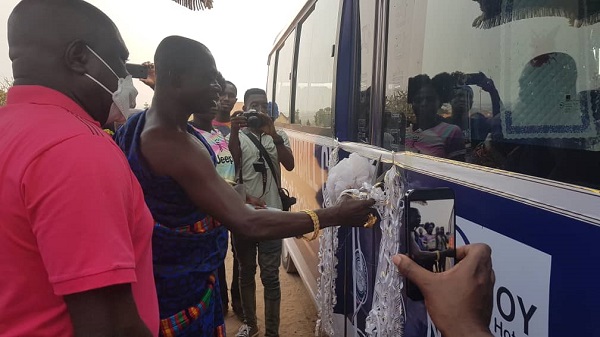 The management of Jachie United Football Club, a Division Two side in the Bosomtwe District of the Ashanti Region, has unveiled a 27-seater Hyundai Hino bus to motivate the team to be competitive.

The management also presented eight sets of jersey, 20 footballs and other kits to the team during a short ceremony which preceded a friendly match between Jachie United and Kaase Stars at Jachie.

The founder of the club, Nana Wereko Ampim-Opoku, who made the presentaion, said they were on course towards actualising their dream of lifting the club from the lower division to the Ghana  Premier League.

He said the bus and the jerseys were sponsored by Nanajoy Hotel at Jachie and commended the management of the hotel for the gesture.

"We established the team four years ago and within a short period, we are participating in Division Two. By unveiling this bus and the jerseys, it is my expectation that the players would be adequately motivated to work hard to propel the team to the Premier League," Nana Ampim-Opoku stated.

The Chief of Jachie, Nana Baffour Kwaku Amoateng IV, who chaired the function, commended the sponsors for projecting the Jachie community through sports.

He implored the youth in the community to take advantage of the team by nurturing their potential in football so they could be recruited into the team.

He also charged the players to be disciplined and committed to help realise the dream of participating in the Premier League.