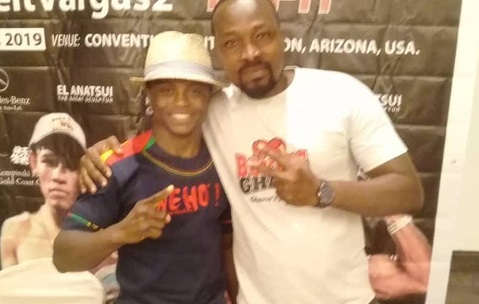 BOXING promoter, trainer and manager, Dauda Fuseini, has said his desire to see amateur boxing trainers acquire Association Internationale de Boxe Amateur (AIBA) certification is the reason behind his decision to vie for the first vice-president’s position at the upcoming elective congress of the Ghana Boxing Federation (GBF) on December 18 at the Accra Stadium.

“We need standard trainers who can represent the nation in international competitions,” he told Graphic Sports in an exclusive interview in Accra last Friday.

He also vowed to solicit for sponsorship for amateur boxers to participate in all international competitions, if elected.

“I will acquire a permanent camping venue for the Black Bombers where they can stay and train and have adequate preparations before tournaments, including training tours,” he revealed.

Mr Fuseini said his experience at the professional level made him the most qualified candidate for the vice-president post.
“I have done amateur boxing and professional boxing, I know the needs and problems of amateur boxers better than any of my opponents and I know the solutions to such problems,” he stated.

He promised to organise regular competitions for amateur boxers and lead a massive talent hunt exercise to recruit talents into a pool whose skills would be honed for the national cause.

“I believe I’m the best person for the job and come December 18 the delegates will make the right decision,” he stressed.

Mr Fuseini is vying for the position alongside Abdul Rashid Williams, alias Believer, and Alhaji Mohammed Samadu, the incumbent first-vice-president.