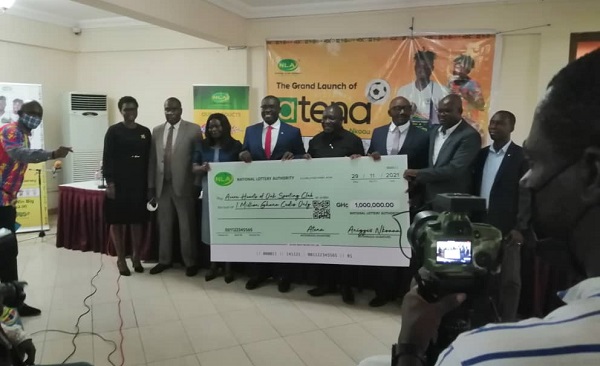 It is the second time the NLA is entering into partnership with a local football club after completing a similar deal with Asante Kotoko a fortnight ago to offer supporters of the two clubs an opportunity to win cash prizes, home appliances, trips to Dubai and a car.

At an official ceremony to consummate the partnership in Accra yesterday, the Director General of the NLA, Mr Sammi Awuku, explained that his outfit decided to buy into the club’s call to partner it for the needed visibility of its product.

He said the GH₵1m offer was just the beginning of good things to come, adding that if the outcome of the partnership was successful it would inform the NLA’s decision for a bigger sponsorship in subsequent years.

“We believe that this partnership would grow from strength to strength and next year if we get good feedback from our partnership with you, Hearts of Oak wouldn’t have to go looking for another sponsor to help foot its bills.

“For us at NLA we are proud to be associated with this partnership deal which will give Hearts of Oak GH₵1m within the football season for 2021/2022.

“On our part as NLA, we’ll be respecting every provision in our agreement and we call on Accra Hearts of Oak, its management and board to also respect every part of the agreement that they are signing with us,” he stressed.

A board member of Hearts, Vincent Sowah Odotei, assured NLA that the was committed to honouring its side of the agreement and noted that the NLA deserved praises for that bold initiative to partner both Hearts and Kotoko.

He explained that the NLA sponsored Hearts not for monetary reasons but for the commitment to ensure football in the country developed.