Hearts of Oak protest against Olympics thrown out 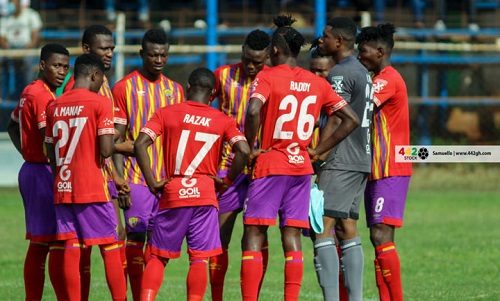 The Disciplinary Committee of the Ghana Football Association (GFA) has dismissed a protest filed by Accra Hearts of Oak against Great Olympics for allegedly fielding an unqualified player during their 28th week Ghana Premier League game at the Accra Stadium last month.

A five-member panel chaired by Osei Kwadwo Adow has, thus, upheld the 1-1 draw result between the two teams and given any aggrieved party within 24 hours to file an appeal to the GFA if they are dissatisfied with the ruling.

Hearts had petitioned the Ghana Football Association to sanction Olympics for fielding Joshua Kwame Rhule whom they described as an unqualified player because he had earlier registered with AS Dragon FC de I’Oueme of Benin during the 2019/20 season with the name Koomson Biney.

Based on this, the petitioners prayed the Disciplinary Committee to sanction Olympics by awarding them (Hearts of Oak) the maximum points and three goals and suspend the player in accordance with article 28(2)(c) of the regulations of the Premier League.

Olympics responded by urging the DC to throw the petitioner's case out because it “lacked merit, is frivolous, malicious and should be dismissed with punitive cost”.

Per their defence, the respondents argued that they used a legitimate means to secure the signature of the player from Koforidua Suhyen FC in the Eastern region and was unaware he played for any other club in Ghana or abroad under a different name.

The respondent again noted that while registering the player, they never encounter any person by name Koomson Biney or neither were their attention drawn to the change of name in the GFA IT system prior to Rhule’s registration and stated that the petitioners failed to prove that they breached any of the regulations.

But after hearing case of both the petitioner and the respondents, the Committee’s findings uncovered that Koomson who has a different date of birth from Rhule was transferred to South Africa and his ICT has since not returned.

Even though the picture of the two players is the same person but with different identification numbers, Olympics cannot suffer any penalty because they did not alter the player’s information and believed Koforidua Suhyen must rather be penalized.