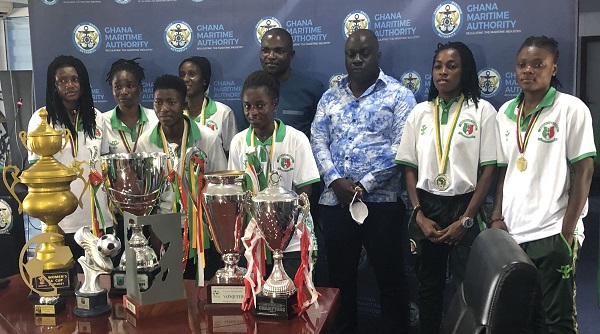 Some players and officials of hasaacas ladies with the trophies during the visit
30.5k Shares

The leadership of Ghana Women’s Premier League side Hasaacas Ladies has presented their trophies and medals to the Ghana Maritime Authority (GMA) following an impressive outing at the CAF Women’s Champions League in Egypt.

Mrs Nsiah Asare took the opportunity to thank the GMA for their financial support in their CAF Women’s Championship League participation where they finished second to Mamelodi Sundowns Ladies.

She called on the company to consider sponsoring Hasaacas Ladies to help make their bid to win the next continental competition a reality.

“The company did a lot for us financially when we were preparing to travel for the competition in Egypt so we decided to bring our trophies and medals to them. We are grateful for what you did for us in the past but we want to plead with you to consider sponsoring our activities,” she said.

The Deputy Director General in charge of Operations and Technical at the GMA, Mr Daniel Appianin, congratulated the team on their feat in the CAF Champions League competition and said his outfit was proud to have supported them.

He explained that with what the players demonstrated in Africa, he expected to see more of them represent the nation in the Black Queens set-up.

“I was touched to hear their story so we decided to help them to participate in the continental competition and they ended up making the entire nation proud. You have demonstrated that you can achieve so much with little support so we will have to see how to support you more