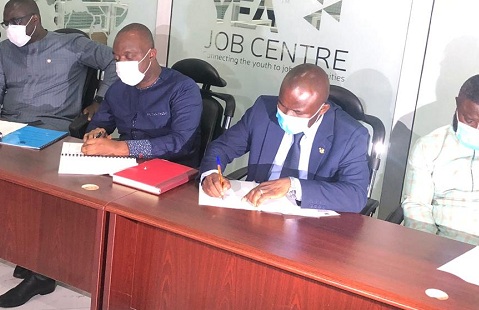 The Youth Employment Agency (YEA) has signed a Memorandum of Understanding (MoU) with the National Sports Authority (NSA) to provide monthly stimulus packages for athletes for the next six months.

According to the agreement, a GH¢500 monthly allowance would be offered by YEA to support 1,000 able and disabled athletes in the country.

Speaking at the ceremony held at the YEA office in Accra yesterday, the CEO of YEA, Justin Kodua, explained that 500 slots out of the module would go to the Ghana Football Association (GFA), with 400 and 100 going to the Ghana Olympic Committee (GOC) and the National Paralympic Committee (NPC), respectively.

Mr Kodua noted that the GFA decided to offer their benefit to female footballers, while the GOC and NPC would meet with their federation heads to select qualified athletes to benefit from the monthly package.

“The YEA has been reviewing our modules which are to facilitate jobs for the youth of this country in this COVID-19 season. One avenue that has been hit hard is the sports fraternity. As an agency mandated to provide job opportunities for the youth, we decided to support these athletes who are not getting anything in this period,” Mr Kodua explained.

“It was welcoming when the GFA came to us that they needed help for their female players, so we decided to extend it to other sporting associations and that was how we reached out to the NSA and GOC.

“As an agency, we deal with individuals so a list of beneficiaries must be given by the NSA and we will deal directly with the recipients. The YEA will not hesitate to cancel the contract should we find out that the list comprises individuals who are not athletes,” he stressed.

The Director General at the NSA, Prof. Peter Twumasi, lauded the YEA’s initiative to support athletes in a season when their source of livelihood had been affected by COVID-19.

He, however, pledged to ensure that the names of only qualified athletes were submitted to receive allowances from the YEA in order to stand a chance of renewing the MoU after the period.

For his part, the GOC President, Ben Nunoo Mensah, advised that federation heads must be allowed to submit the names of qualified athletes for the allowances so they could be held responsible for tampering with the list.

“I want to appeal to the NSA and the YEA to allow federation heads to submit the names of athletes and sign to it so we can hold them responsible when it later comes out that they are not qualified,” he emphasised.