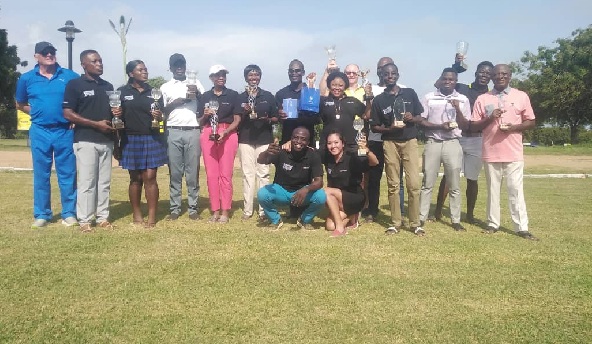 The winners with their trophies
30.5k Shares

The third edition of the competition, which was staged at the Celebrity Golf Course at Sakumono last Saturday, was so keen that Lartey could only beat Malcolm Watson with just a stroke, while Richard Agyei took the third position.

Joy Arkutu was also magnificent on the course as she recorded 35 stableford points to win the ladies event ahead of her closest challengers, Margaret Owusu Baah and Vivian Dick, who recorded 32 points and 28 points respectively to finish in that order.

Young and enterprising Michael Kwame Nyarko of the Kinder Paradise School in Prampram won the Men’s category B event with 44 points, followed by Fenen Amuzu and James Otoo, who amassed 41 points and 36 points respectively to finish in that order.

In the ladies’ category B event, Helen Appah emerged winner with 40 stableford points, followed by Georgina Andoh who picked 28 points to beat Jenny Le on count-back.

The organiser of the event, John Mawuli Nyarko, described the event as a success, considering the large representation of golfers and noted that his late mum would feel honoured by the competition.

“I must admit that this year’s event which is the third edition has been awesome. I least expected the tournament would happen due to the COVID-19 pandemic but thanks to Tang Palace Hotel, M&J, Southey Contracting Offshore Division (Ensol Energy), Royal VVIP Transport and Micasso Spanish Design its come off.

“The sponsors have been very supportive from day one, especially Tang Palace; the tournament keeps improving year after year. I am sure my late mum in whose honour the competition was organised would be happy wherever she is. I lost her when I was just two years,” he noted.